Harbhajan Singh rose to the occasion with the ball in the final as Mumbai Indians defended a hefty total and defeated Rajasthan Royals in a one sided encounter.

Mumbai Indians hammered 202 for the loss of six wickets in the stipulated 20 overs and the innings of Rajasthan Royals was folded back for 169 with seven balls to spare.

Harbhajan Singh (Mumbai Indians) was declared ‘Player of the match’ for his match winning bowling spell of 4-32.

Dwayne Smith (Mumbai Indians) was announced ‘Player of the series’ for his outstanding batting performance.

The final of the Champions League Twenty20 was played on Sunday, October 6, 2013, at Feroz Shah Kotla, Delhi.

Earlier, Rahul Dravid, the captain of Rajasthan Royals won the toss and made up his mind to chase the target. Dwayne Smith and Sachin Tendulkar opened the innings for Mumbai Indians swiftly by scoring 27 runs in four overs with 1 six and 2 fours from the first and two boundaries off the latter. Tendulkar hit 2 consecutive fours in the next over but was clean bowled by Shane Watson for 15 and was replaced by Ambati Rayudu. The run rate was slowed down and the next five overs ended without any boundary as score touched 60 after 60 balls. Dwayne Smith hit three back to back fours in the next over as Pravin Tambe destroyed his stumps for 44 off 39 balls with 1 six and 5 fours.

The skipper of Mumbai Indians, Rohit Sharma, walked in next and picked up the scoring rate by hitting 1 six and 1 four in the 13th over. Rayudu became the second victim of Tambe for 29 off 24 with 4 fours and the wicket fell at 104 in 13.4 overs. Kieron Pollard was the next batsman who took guards as Sharma hit 2 fours in the 15th one and surpassed the 4000 runs in Twenty20. The pair added another 20 runs in the 16th over with 2 sixes and 1 four while Pollard was gone for 15. Glenn Maxwell started off with 1 four and 1 six and Sharma was caught by James Faulkner at deep midwicket off Rahul Shukla for 33 from just 14 deliveries with 2 lofty sixes and 3 fours.

Dinesh Karthik appeared in the park next and scored 20 runs in the 18th over in the company of Maxwell with 2 sixes and 1 four. The score was enhanced to 192 in 19.3 overs when Faulkner was run out for 36 off 13 mere balls with 2 high sixes and 4 fours. Karthik was batting at 13 as Mumbai Indians piled up 202 in 20 overs.

Pravin Tambe was the top wicket taker with two whereas James Faulkner, Shane Watson and Rahul Shukla shared one wicket each.

Rajasthan Royals lost their first wicket at 8 when Kusal perera ran himself out and Sanju Samson joined in with Ajinkya Rahane. The duo kept the score board busy by reaching 46 in 4 overs with 3 sixes and 2 fours. Samson accumulated 17 runs in the next one with the assistance of 1 six and 2 fours while the boundaries were flowing from the bats of the two batsmen regularly. Sanju Samson powered his fourth Twenty20 fifty with a four whereas the hundred of the innings was witnessed in the 9th over. He was dropped at 53 but finally went back to the dressing room for 60 off just 33 balls with 4 towering sixes and even fours. The second wicket fell at 117 in 11.5 overs as Ajinkya Rahane smashed his 17th Twenty20 half century in the 13th one.

Shane Watson hit a six but was caught by Pollard off Harbhajan Singh for 8 and Rahane followed him at 155 in 16.1 overs for 65 from 47 with 2 sixes and 5 fours. That was the beginning of disaster for Rajasthan Royals as the rival bowlers took over and especially Hrabhajan Singh was unplayable. The last six batsmen surrendered for just 14 runs and the entire team was bowled out for 169 in 18.5 overs.

Harbhajan Singh was the star performer with four wickets, Kieron Pollard held three whereas Nathan Coulter-Nile and Pragyan Ojha chipped in with one wicket each.

Mumbai Indians triumphed in the final against Rajasthan Royals by a healthy margin of 33 runs and grabbed the 2013 champions League Twenty 20 Trophy. 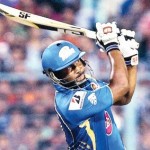 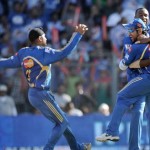