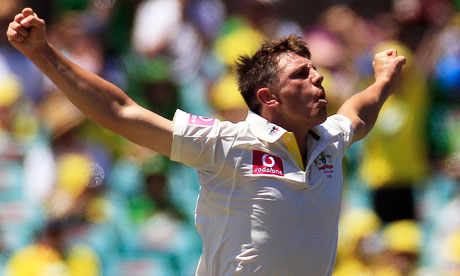 Indian batting once again collapsed against the destructive bowling from the Australia pace trio on the first day of the second Test at Sydney. The hosts struggled too in the beginning of their innings but were placed comfortably at the end of the day.

The visitors were restricted to 191 runs before they were bowled out in 59.3 overs and the hosts had reached at 116 runs for the loss of three wickets at stumps.

The match is being played at Sydney Cricket Ground from January 3rd, 2012, which is moving fast towards its destiny.

Indian Captain MS Dhoni won the toss and elected to bat on a seaming track which looked full of life. Earlier the curator of the ground, Tom Parker had anticipated that the pitch will be assisting the quickies on the first day but Dhoni ignored the recommendations and decided to bat.

The decision bounced back when India lost the opener Gautam Gambhir without a run on the board by the new ball sensation James Pattinson on the third ball of the day. Virender Sehwag and Rahul Dravid faced an instant pressure after the initial set back and tried to assemble the innings. They added 30 runs for the second wicket when Dravid was declared leg before wicket off Peter Siddle at five runs.

Sachin Tendulkar appeared on the scene at his happy hunting ground with a standing ovation from the spectators who anticipated his 100th hundred in the match. He made his intentions clear by dispatching three boundaries in couple of overs and looked solid while negotiating the pace attack.

Virender Sehwag got a life when he was dropped at 23 runs on the third ball of the 14th over by Ricky Ponting in the slip off Ben Hilfenhaus. He was unable to capitalise the chance and was caught at the wicket by Brad Haddin of Pattinson at his personal score of 30 runs.

The Kangaroos had their tails up when India lost its third wicket at 55 runs and the experienced VVS Laxman was sent back to the pavilion after the addition of just four runs. Virat Kohli joined in next with the little master and they shared 37 runs partnership for the fifth wicket before the later was gone at 23 runs.

Indian hopes were shattered when Tendulkar stumps were dislodged by Pattinson off an inside edge from the master blaster. He lost his wicket at his individual contribution of 41 runs once the total on score board reflected 124 runs. Dhoni and the young all rounder Ravichandran Ashwin brought some hopes back after accumulating 54 runs for the seventh wicket but the later was gone at 20 runs.

The last three batsmen were unable to open their accounts against the lethal express attack of the Aussies. Dhoni was left stranded at one end on unbeaten 57 runs as the whole team was bowled out at 191runs in 59.3 overs.

James Pattinson was once again the main destroyer with four wickets, Hilfenhaus and Siddle shared three wickets each.
The Australians had a miserable start as the experienced Zaheer Khan captured three wickets in no time and their top order was reeling at 37 runs. The experienced duo of Ponting and the Captain Michael Clarke took over the charge by their determined batting and led their team to solidarity at stumps on the first day. The Kangaroos has achieved 116 runs without any further loss, Ponting and Clarke were unbeaten on 44 and 47 runs respectively.

Australians are 75 runs behind the first innings total of the Indians and will try to take a commendable first innings lead on the second day. The visitors will anticipate few quick wickets early in the morning to keep them in the match which is slipping from their hands at the moment.