Austarlia was cruising well in their first innings and had scored 154 runs for the loss of three wickets at stumps on second day against New Zealand in the first Test. The Black Caps were bowled out at 295 runs and the home side feels on the driving seat at the moment.

The encounter is being going on at Brisbane Cricket Ground, Woolloongabba, Brisbane, scheduled to be played from December 1st to 5th, 2011. 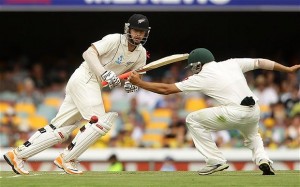 Earlier the visitors had scored 176 runs after losing five important wickets at the close of the first day’s play which was disturbed due to rain and 51 overs could be bowled throughout the day. Daniel Vettori and Dean Brownlie were at the crease with 45 and 32 runs respectively and gave a real fight back.

Vettori was unbeaten on 86 runs at the end of the 68th over and opened up in the next over. He dispatched first ball from Nathan Lyon for a four, added two runs on the third ball and again swept the fifth ball for another boundary. He tried to take a suicide single on the last ball which was not there and lost his wicket.

The all rounder was unlucky to miss his century by just four runs and added valuable 158 runs for the sixth wicket. Brownlie stuck well and remained unbeaten at 77 runs as the Kangaroos ripped through their batting without much hassle and the whole team was bowled out at 295 runs in 82.5 overs.

Lyon was the star performer with four wickets, Siddle and Starc shared two wickets each as James Pattison claimed one wicket for the hosts.

It was a nightmare debut for the opener David Warner as he was gone after scoring just three runs and Australia lost their first wicket at the same total.

The second wicket of Philip Huges was gone after the addition of 22 runs when Usman Khawaja and their most experienced batsman Ricky Ponting got together at the crease. Ponting opened his arms with couple of fours in the 10th over as Khawaja was accumulating runs at the other end.

The duo added 66 runs for the third wicket before Khawaja was run out on the first ball after the tea interval. He was gone at 91 runs after contributing 38 runs and it was the time for the Captain Michael Clarke appeared on the scene.

There has been lot of criticism on Ponting as far as his form was concerned and most recently the ex-all rounder of New Zealand Chris Cairns suggested him to retire after the second Test of the ongoing series. The master blaster came back strongly by his performance in this innings and scored fifty in the 37th over by dispatching Chris Martin to four and proved his worth in the side.

The pair gave a solid reply to the rival bowling and at the close of the second day took the score to 154 runs without any further loss. Ponting was unbeaten on 67 runs and heading towards his 40th ton in Test cricket and was being well supported by Clarke who was at the crease with 28 runs.

Tim Southee and Chris Martin were the only successful bowlers for the Black Caps with one wicket each.
Australia looks in total command of the game and will try to consolidate whereas New Zealand will try to get early wickets on the third day to remain in the game.