Pakistan is placed well by gaining a first innings lead of 280 runs against Bangladesh at the close of the second day’s play. Only a miracle can save the hosts from the innings defeat which is very much on the cards now.

Pakistan has thrashed 415 runs for the loss of four wickets with a fine ton by Mohammad Hafeez and Younis Khan was on his way to add another one under his belt.

Earlier the home side was bowled out at mere 135 runs in their first innings on the first day and they have conceded 280 runs lead so far.

The first Test of the series is being held at Zahur Ahmed Chowdhury Stadium, Chittagong, from December 9, 2011.
Pakistan scored 132 runs without any loss at stumps on the first day in 38 overs. Mohammad Hafeez and Taufeeq Umar were unbeaten on 74 and 53 runs respectively. Bangaldesh bowlers tried their best to break the partnership but were unable to impress as the tourists consolidated the innings.

Pakistani openers started off the second day in a measured way, scored four runs in the first over while next five were maiden. Bangladseh Bowlers Shahadat Hossain and Mahmudullah bowled on line and length keeping in view their field setting. Hafeez ended the drought of runs by dispatching a four in the 45th over and collected six runs in that over.

The duo kept on creeping watchfully, added just 11 runs in the next five overs and the proceedings looked dull. The home side got the first wicket when Taufeeq Umar was declared leg before wicket off Mahmudullah for hard earned 61 runs.

The first wicket fell at 164 runs while surpassing the innings total of the Bengal Tigers and providing a solid base for the huge total. Azhar Ali came in next under the favourable batting conditions and there was a good chance for him to exhibit his talent.

Hafeez continued his march towards prosperity and achieved another milestone in his career by smashing his fourth century on the last ball of the 56th over. Azhar was following the ball well and kept on adding useful runs at the other end, he shared 56 runs partnership but lost his wicket after scoring 26 runs.

The second wicket fell at 220 runs and it was Younis Khan who took guards and started off in his usual way of ‘stand at the wicket and runs will come’. Hafeez utilized all scoring opportunities while Younis Khan got a lucky escape when he was dropped on 15 runs at deep square leg by Elias Sunny off Shahadat.

Hafeez was unlucky once he was given lbw in the very next over when the visual replays witnessed that he had got a nick on the ball. He scored 143 runs, the third wicket was gone at 265 runs and Misbah-Ul-Haq followed him with the addition of 46 runs in the total for 20 runs.

The young Asad Shafiq replaced him and provided a solid stand with younis who played an authoritative innings until the close of the play. Pakistan had reached at 415 runs with six wickets still in hand, younis is unbeaten on 96 runs and Asad is demonstrating well at 40 runs.

The visitors are placed in the driving seat by enjoying a lead of 280 runs and they can enhance it to a certain target where the home side can be dismissed without batting second. 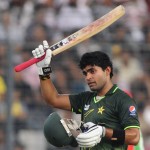