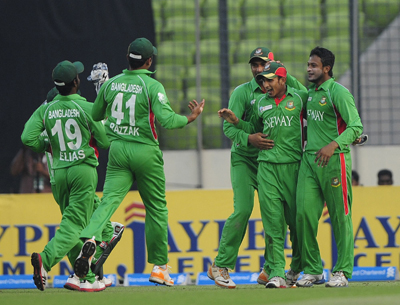 Bangladesh lost the final of the Asia Cup 2012 by mere two runs against Pakistan but has emerged as a strong unit after their tremendous show during the tournament.

Bangladesh - emerging as a strong unit in international cricket

They looked like a different unit under the command of Mushfiqur Rahim and their coach Stuart Law must be proud of their performance in the entire tournament.

The Bengal Tigers started the journey towards prosperity in 2011 with a win against Ireland by 27 runs in the ICC Cricket World Cup 2011, at Mirpur on February 25. They surprised England in the 28th encounter of the World Cup while putting them in the corner by two wickets on March 11, 2011 at Chittagong and all cricket lovers in the country became jubilant. The march  continued under the leadership of Shakib Al Hasan when they defeated the Netherlands by a huge margin of six wickets on March 14, 2011 at Chittagong again.

They played fairly well throughout the tournament, appeared in six matches, won three and lost three while they earned a net run rate of -1.361. West Indies qualified for the quarter finals by virtue of a better run rate of +1.066 with the same results as far as the matches played and the results achieved by Bangladesh are concerned.

Australia visited Bangladesh in April 2011 and played three One Day International series which the visitors clinched 3-0.

Bangladesh went to Zimbabwe for a five ODI series in August 2011, they lost the initial two matches by a reasonable margin as the third one was comparatively close and was lost by just 5 runs. They fought back well in the remaining two encounters and won them in a commanding way. The only Test played at Harare Sports Club was lost on August 8, 2011 as Zimbabwe triumphed by 130 runs.

Shakib Al Hasan soon got axed and Mushfiqur Rahim was given the charge of leadership from the home series played against West Indies in October, 2011. The visitors emerged winners in the first two matches while the third one was grasped by eight wickets by the home side. The Windies turned up winners in the two Test series which they clinched 1-0.

Pakistan visited Bangladesh next in December 2011, white washed the Test series 2-0, the ODIs 3-0 and that was a setback for the Bangladesh team.

The Bengal Tigers played just two Twenty20s in 2011 and the result was even as they won the first match against West Indies on October 11, 2011, by three wickets. The match against Pakistan was played on November 29, 2011 at Mirpur and was lost by 50 runs.

Bangladesh Premier League was held for the first time in February 2011 and that changed the direction of the Bangladesh cricket as quite a few foreign players were hired by the different franchises. Almost all players of their national team along with many emerging local young cricketers gained confidence by taking part in the tournament.

The Asia Cup 2012 was the beginning of the consolidation for the young team of Bangladesh. The complete tournament was staged at Shere Bangla National Stadium, Mirpur and the home side took full advantage.

The inaugural match of fixture was played between Bangladesh and Pakistan on March 11, 2011 and the Green Shirts were restricted on 262 runs after they had lost eight wickets in 50 overs. The home team was chasing well until they lost the sixth wicket at 224 runs in 43.3 overs and were unable to finish the game in their favour and lost the match by just 21 runs.

The Bengal Tigers stunned India in their next pool match which was played on March12, 2012. India scored a sustainable score of 289 runs after losing just five wickets in the metered 50 overs. The match will be remembered by the cricket legend, Sachin Tendulkar who was able to smash his 100th hundred for which he had been struggling since one year. He dispatched 114 runs while opening the innings, faced 147 runs which comprised one six and 12 fours.

It was a formidable score keeping in view the bowling strength of India and all cricket pundits believed that they can defend that. Bangladesh lost an early wicket for 15 runs and the visitors might have dreamed of having the game in their pocket when the opener Tamim Iqbal and Jahurul Islam demonstrated a solid stand of 113 runs for the second wicket before the latter was gone for 53 runs.

The tempo was carried on by the middle order batsmen as Tamim lost his wicket for 70 and the game was taken over by the young gun Nasir Hossain and the world renowned all rounder, Shakib Al Hasan. The latter demolished the Indian attack by thrashing 49 off 31 balls with two sixes and five fours and Nasir contributed 54 from 58 balls with five fours. Their captain, Mushfiqur Rahim did not let his team down and his timely onslaught took the game away from the Blue Shirts. He plundered unbeaten 46 off mere 25 balls with three lofty sixes and three fours and brought the biggest upset of the tournament while defeating India by five wickets.

The win against India boosted their confidence and they faced Sri Lanka in the 6th match of the tournament on March 20, 2011. India was having a close look at the match as the win by the Islanders could have earned them a berth in the final.

The Lankan Lions were bowled out for 232 runs with a ball to spare and the main resistance was witnessed by Chamara Kapugedera who was the top scorer with 62 runs. The target was revised to 212 runs in 40 overs due to the interference of the weather as the visitors gained some edge. The Bengal Tigers humiliated the Sri Lankans while achieving the target by pounding 212 runs in 37.1 overs for the loss of five wickets and rushed into the final while India was directed to go back home.

The final was played against Pakistan on March 22, 2011, in front of the capacity crowd which included dignitaries like the Bangladesh Prime Minister, Sheikh Hasina as well. The Green Shirts faced a tough time in the batting and they managed a hard fought total of 236 runs for the loss of nine wickets in 50 overs which was not a formidable total to defend.

Bangladesh was given a rising start by their openers, Tamim Iqbal and Nazimuddin who associated 68 runs for the first wicket. Shakib Al Hasan and Nasir Hossain shared a match winning partnership of 89 run for the fourth wicket and they were cruising well towards their goal. Shakib lost his wicket for 68 off 72 balls with one six and seven fours which became a demoralising factor for the team.

They fought well until the last over when 9 runs were required off 6 balls as the last over was bowled by Aizaz Cheema. The batting duo of Mahmudullah and Abdur Razzak managed five runs on the four balls as the latter was bowled on the fifth ball. They required four runs on the final ball but the accurate yorker by Aizaz Cheema restricted them to just one and the thrilling final was lost by mere two runs.

The entire crowd could not believe that as the victory was missed by a whisper and the tears were obvious in the eyes of most Bangladesh players.

The performance of the Bangladesh team was hailed by all critics of the game and even the winning captain, Misbah-Ul-Haq complimented them on their execution and determination throughout the tournament.

Tamim Iqbal was the second highest run scorer with 253 at an excellent average of 63.25, the best of 70 with four fifties.

They lost the final in a fighting manner but have emerged as a new force in the cricket world and can dictate their terms to even strong outfits of the world in the near future.