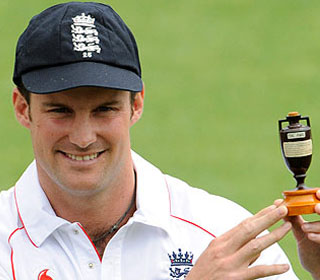 England’s biggest challenge is yet to come

England had a vision to become the world’s No.1 Test team by the year 2007, and the groundwork was laid by captains such as Nasser Hussain and Michael Vaughan and Duncan Fletcher’s role was instrumental in nurturing talent in the pursuit of the goal.

However, the target was achieved four years later with Andrew Strauss as captain and Andy Flower as coach forming an excellent partnership in terms of efficient man-management resulting in total commitment on the field.

The team statistically deserves to be on the top of the table due to its consistency in comparison to its competitors. Under Strauss, England have defeated India, Australia, Sri Lanka and Pakistan and leveled a 4-Test series in South Africa. What this proves is that England could be one of the legendary Test teams in the making, pretty much like Lloyd’s West Indies in the 70s and 80s and Australia in the late 90s and 2000s. Yet, this team’s greatness can be measured appropriately with their upcoming travails in the Indian subcontinent, which could be considered as their final frontier.

In business, a firm is said to have a competitive advantage when it has expanded itself from its home shores. It becomes a brand when it proves that it can be successful in any country. 2012 will be the most testing for Strauss and co. The likes of Sri Lanka, India and Pakistan were beaten by England in England but that proves nothing of their dominance against these teams. All the three sides have a huge stronghold at home, even as Pakistan are playing in the UAE as their home country. And England play all three of them in the same year, which compounds England’s problems which already exist due to a packed calendar year.

Nasser Hussain was perhaps the only England captain who gave his country belief that they could succeed in the subcontinent. His side beat Pakistan and Sri Lanka in late 2000 and drew 2 Tests out of 3 in India against a strong Indian side at home, in a period when English cricket was undergoing several changes. After that, history proves that England have began to struggle again with conditions completely alien to them.

Michael Vaughan, England’s most successful Test captain states that ‘England have tough days ahead of them’. He knows well what he is talking about because out of the 26 Tests he has won as skipper, he could not win a single Test in Pakistan where his Ashes-winning side lost 0-2 in 3 Tests in October 2005. 2 years later, Vaughan was still captain when England lost 0-1 to Sri Lanka in 3 Tests as Muttiah Muralitharan was in top form, breaking Shane Warne’s record for the highest number of Test wickets and made their batsmen clueless as to how to play spin well. Followed by which in November 2008, the brash Kevin Pietersen took over Vaughan as captain and bravely led England in India but India prevailed 1-0 in 2 Tests.

I would like to believe that England has the best chance to make amends to this poor record in 2012, despite being whitewashed in an ODI series in India a few months ago. Pakistan will be hosting England in the UAE, and the pitches out there are usually very dry at this time of the year rather than dusty. Besides, England on paper also looks to be a much stronger side as Pakistan still has a fragile batting line-up in comparison to England’s versatile bowling attack which comprises of Anderson, Broad, Swann, Panesar and Bresnan to name a few. Monty Panesar has been in tremendous form in county cricket off late and England could consider playing him in place of one fast bowler. While Sri Lanka is in the decline stage of its cricketing lifecycle and their vulnerability at home has been exposed without the likes of Murali and Vaas even by a transitional Australian side. Although India is evergreen in being formidable at home, 11 months is still a long time and that team also has aging players like Dravid, Laxman and Tendulkar and is susceptible to injuries time and again due to the excessive cricket they play.

England have always given Tests priority and Strauss and Flower will have to ensure through the rotation of players that T-20s and ODIS do not ruin their vision and preparations for these three important tours. The likes of the IPL and the fact that they have to also defend the World T-20 championship in Sri Lanka might just shift the ECB’s focus soon. These will be tricky, yet exciting times for England to face. Isn’t it?