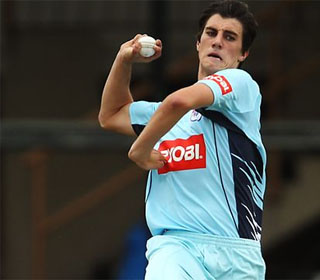 Patrick Cummins could be a huge loss for Australia

18 year old kids find themselves in high schools, shooting on the next ivory lassie to pass by. Australian teenage sensation, Patrick Cummins meanwhile, already has a lot to tell his grand kids about. Having burst onto the scene in the Airtel Champions League Twenty 20 tournament, Cummins has shown immense amount of maturity and promise and is indubitably a kid to watch out for.

Patrick Cummins was an unknown commodity a year ago, but with consistent breakthrough performances for New South Wales and an exhibition of tearaway pace, he finally caught the eye of the national selectors. After the Argus Review, John Inverarity’s (National Selector), prime focus was to inject youth into the Australian setup.

Cummins finally got a chance to prove himself in the Australian colours when the men from down under took on the old enemy, South Africa in a T20 tournament. Cummins did not disappoint as he bagged a 3-for capping off an impressive debut. Patty kept up the good work as he followed up with strong performances in the 2nd T20I and the One day Internationals to follow. Despite this, many believed and rightly so, that he was not ready for the baggy green.

Australia’s capitulation to 21 for 9 in Cape Town sent shivers down the Australian selection committee. After a reasonable outing in Sri Lanka, questions were being raised again, whether Australia had hit rock bottom. 10 days later, everything changed.

The new selection committee, headed by Inverarity, took a punt on the young lad from New South Wales, and did it count or what?!

After a decent outing in his first innings as test bowler, Patrick worked South African legend, Jacques Kallis over in a manner even the world’s greatest would be proud of. Cummins displayed immense discipline with a barrage of well targeted bumpers unsettling one of the finest before offering the sucker ball as Kallis edged to Clarke falling for a paltry, 2. It was in so many ways reminiscent of the way Ishant Sharma foxed out Ricky Ponting in that famous Perth test in 07-08.

Cummins ended up with a 6 for taking his match tally to 7 as the world stood up to notice who Patrick Cummins was. This was not all, Cummins bailed the Australians out of jail as he struck the winning runs in a tense finish. Sadly for Cummins, his young body could not stand the rigours of test cricket and he was forced to sit out of the New Zealand series. The bigger blow came when he was declared unfit for India’s tour down under.

Australia will miss him badly. With injuries to so many of their bowlers in Ryan Harris, Mitchell Johnson and now Patrick Cummins, Australia find themselves in a spot of bother. James Pattinson, another of Australia’s young brigades will have to step up and take charge if Australia have a chance of bowling out a World class Indian batting line up. Peter Siddle, Ben Hilfenhaus, Mitchell Starc and Nathan Lyon form the rest of the bowling line up. Starc in his brief outing has not looked impressive enough to stake a claim come boxing day. A huge series beckons, hopefully for young Patrick Cummins, he can make a comeback in the Commonwealth Bank ODI series to follow, fitness prevailing.

Undoubtedly, Cummins has a huge future ahead of him. There was another teenager making headlines only a year back. Mohammad Amir, unfortunately found himself in the midst of a major spot fixing scandal and might never play cricket again. Not saying that Cummins could go down the same path, but he must remain wary and focus on his art, Patrick Cummins could be a superstar in the making!