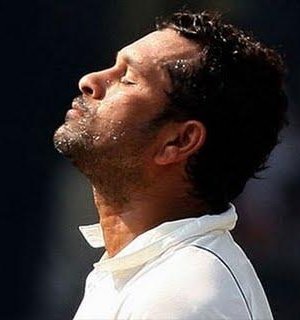 Sachin Tendulkar is the master batsman of the present day cricket and almost all batting records revolve around him. He holds the record of highest runs in Tests by thrashing 15409 runs with the assistance of 51 centuries and 65 fifties. The little master has smashed 18111 runs in One Day Internationals which comprise 48 hundreds and 95 fifties.

Whenever he enters in the centre with a bat records starts following him as every run he scores becomes a part of history. He is anticipating his 100th international ton every time he goes in with the willow but it is getting away from him since March 2011. The last ton was achieved at Nagpur, on March 12, 2011, in the ICC Cricket World Cup 2011, against South Africa.

Sachin Tendulkar has scored century nearly after every six innings in Tests and ODI cricket has witnessed his three figures approximately every tenth match. We will highlight his innings in both formats of the game when he was close to his magical figure taking in view 80 plus scores and the way he was sent back to the pavilion.
One Day Internationals

85 runs vs. Pakistan in the ICC Cricket world Cup semi-final at Mohali, on March 30, 2011. He was caught by Shahid Afridi at short extra cover at the bowling of Saeed Ajmal on the last ball of the 37th over.

He took part in just one ODI after that against Sri Lanka on April 2nd 2011, in the Final of the event and managed 18 runs, India lifted the trophy winning the important game by six wickets.

The master blaster punched his last century against South Africa in early January, 2011, by scoring 146 runs. 91 runs vs. England in August, 2011, the fourth Test at Kennington Oval, London. He was declared leg before wicket off Tim Bresnan on the first ball of the 77th over.

94 runs vs. West Indies in November, 2011, the third Test at Wankhede Stadium, Mumbai. The right hand batsman was so close to the land mark when he was caught by Darren Sammy in the second slip on the bowling of Ravi Rampaul. It was a short ball and Tendulkar wanted to punch but was unable to keep the ball away from the fielder. The whole crowd was stunned as he started walking back to the pavilion and that was an unbelievable scene.

80 runs vs. Australia in the second Test on January 6, 2012, at Sydney Cricket Ground. The 38-year-old got an outside edge, the ball went to the keeper who deflected it and Michael Hussey held the cherry in the first slip at the bowling of Michael Clarke.

Sachin Tendulkar has better average of scoring centuries in Tests as compared to the ODIs. India will be playing two more Tests against Australia, the third at Perth will start on January 13, 2012, followed by the fourth and last at Adelaide which will commence from January 24, 2012. It is a matter of time and luck when he will celebrate his grand achievement which is very much possible in January 2012.