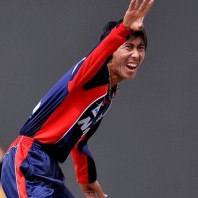 The left arm spinners duo of Basant Regmi and Shakti Gauchan destroyed the batting line up of Hong Kong as Nepal won their opening game comprehensively.

Nepal powered 149 runs after losing eight wickets in the allotted 20 overs and the innings of Hong Kong was squeezed for just 69 runs with 18 balls to spare.

Shakti Gauchan (Nepal) was declared ‘Player of the match’ for his outstanding spin bowling figures of 3-9. 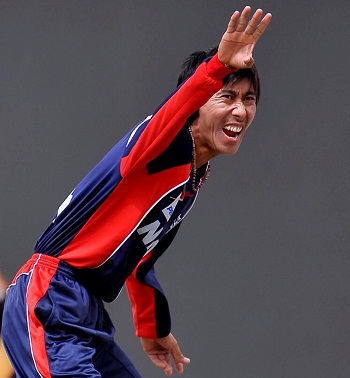 Earlier, Jamie Atkinson won the toss for Hong Kong and asked Nepal to bat first on a good looking strip. The openers took off well by scoring 36 runs in five overs but surrendered their wickets at the same score. The captain of Nepal, Paras Khadka and Gyanendra Malla kept the score board ticking with regular boundaries while the total went past the hundred runs mark in the 15th one. The third wicket partnership of 80 runs was broken at 116 when first was gone for 41. Malla continued with his aggression and was finally caught and bowled by Haseeb Amjad for 48 off 41 balls with 1 six and 4 fours. Sharad Vesawkar scored 14 as the Nepalese team smashed 8-149 in 20 overs.

Haseeb Amjad was the highest wicket taker with three, Nadeem Ahmed got two and Najeeb Amar registered one wicket.

Hong Kong lost their two top order batsmen for just nine runs and the third wicket fell with the addition of 28 runs to the total. Babar Hayat and Mark Chapman enhanced the score to 58 before the latter was clean bowled by Basant Regmi for 13. The wickets started sliding without much resistance and the especially the Nepalese spinners were enjoying their deadly bowling. Babar Hayat was the sixth batsman who went back to the pavilion for 20 off 25 with 2 fours. The last six wickets fell within 11 runs and the entire Hong Kong team was bowled out for 69 mere runs.

Basant Regmi and Shakti Gauchan were the main wicket takers with three wickets each, Sompal Kami held two whereas Paras Khadka and Jitendra Mukhiya shared one wicket each.

Nepal triumphed in their important encounter with a hefty margin of 80 runs and earned two points.