Luke Wright toyed with the bowling of Afghanistan but missed his century by one run as England won the ICC World Twenty20 match comprehensively by a huge margin.

England amassed 196 runs for the loss of five wickets in the measured 50 overs and Afghanistan was bowled out for 80 runs with 16 balls to spare. 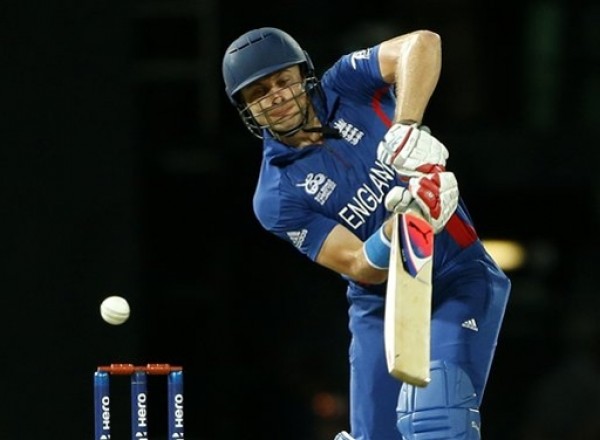 Luke Wright – A destructive innings of 99 from 55 balls

Luke Wright (England) was declared ‘Player of the match’ for his commanding unbeaten knock of 99 from 55 balls.

3-  Afghanistan out of the tournament.

The second match of Group A, in the ICC World Twenty20, was played on Friday, September 21, 2012, at R Premadasa Stadium, Colombo.

Earlier, Afghanistan captain, Nawroz Mangal, won the toss and offered the batting to England who had a shaky start by losing their first wicket without a run on board when Craig Kieswetter was clean bowled by Shapoor Zadran.

Luke Wright joined in with Alex Hales and they took the score to 15 after first four overs. The duo opened up in the fifth over and dispatched 23 runs in the next over off Shapoor Zadran with 1 six and 4 fours and added another 14 in the sixth over with 3 fours. The first wicket partnership was broken on the first ball of the 10th over at 69 as Alex Hales was run out for 31 off 27 balls with 5 fours.

Luke Wright was dropped by Izatullah Dawlatzai at short third man off Mohammad Nabi at 75 and the batsman got full use of the chance. He took over from there with a couple of little partnership and hit three consecutive sixes off Izatullah Dawlatzai in the 19th over. Wright was unlucky to miss his maiden T20 ton by one run, remained unbeaten on 99 off 55 mere deliveries with 6 towering sixes and 8 sweetly timed fours. England hammered 196 runs with five wickets in hand at the end of the 20th over.

Izatullah Dawlatzai was the top wicket taker with two whereas Shapoor Zadran and Dawlat Zadran held one wicket each.

Afghanistan commenced their innings in a disastrous manner by losing their two front line batsmen for just 2 runs on board. The English bowlers never looked back from there and invaded the inexperienced batting line up of the rival team. The wickets started falling like ninepins and Afghanistan was struggling at 8-26 runs in 8.6 overs. They were in danger of making a record of registering as a team who has scored the lowest total in a Twenty20 international. Kenya holds such record by scoring 67 runs against Ireland at Belfast on August 4, 2012.

Gulbodin Naib and Shapoor Zadran resisted against the English lethal bowling attack. The first punished Graeme Swann for 16 runs in the 12th over and the only fifty of the innings was scored in the 14th over. Gulbodin Naib hit a couple of massive sixes to Jade Dernbach in the 15th over and Shapoor Zadran sent the first ball of the following over flying over the boundary.

The ninth wicket associated 44 runs when Shapoor Zadran was declared leg before wicket off Graeme Swann for 9 runs. Gulbodin Naib became the last victim after playing a hurried knock of 44 from 32 balls comprising 3 huge sixes and 5 powerful fours.

Jade Dernbach, Stuart Broad, Samit Patel and Graeme Swann were the main destructors with two wickets each as Steven Finn claimed one wicket.

England won their first match of the tournament with a massive margin of 116 runs against the minnows Afghanistan and clinched two points.