New Zealand hammered 191 runs with seven wickets in hand at the end of the scheduled 20 overs and Bangladesh was restricted to 132 after they lost eight wickets. 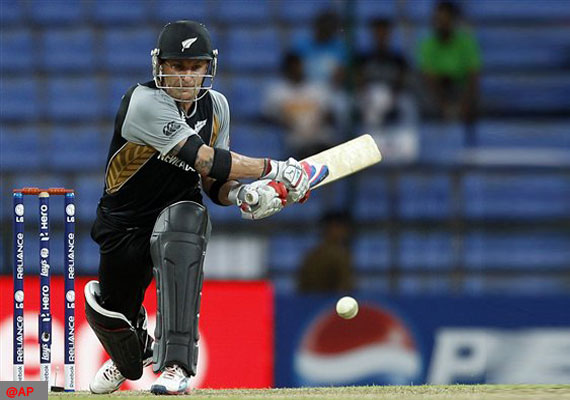 Brendon McCullum – A herculean knock of 123 from 58 balls

Brendon McCullum (New Zealand) was declared ‘Player of the match’ for his herculean innings of 123 off 58 mere deliveries.

Earlier, the skipper of Bangladesh, Mushfiqur Rahim, won the toss, he preferred to chase and sent New Zealand in to bat. Martin Guptill and James Franklin opened the innings for the Black Caps in an attacking manner and the first hit a six in the second over. The score reached 19 in 3.2 overs when Guptill was gone for 11 and the highest run scorer in T20 internationals, Brendon McCullum, walked in the centre. McCullum has scored 1443 runs (prior to the current match) at an excellent average of 36.07, the best of unbeaten 116 with 9 fifties at a superb strike rate of 132.75.

The duo started consolidating the Kiwi’s innings and McCullum was the most aggressive of the two. He hit a couple of fours before getting his first six in the eighth over and hit another six in the 11th over. Brendon McCullum scored his rapid fifty on the second ball of the 13th over with a four that was attained in 29 balls and the first hundred of the innings also appeared on board in the same over. The second wicket partnership contributed 94 quick fired runs on 65 balls as James Franklin lost his wicket for 35 off 36 balls with 1 six and 2 fours.

The New Zealand captain, Ross Taylor, joined in next with McCullum who was batting at his best and punished Shafiul Islam for 15 runs in the 17th over with 1 six and 2 fours. Taylor joined him in the next over by dispatching 2 fours as McCullum was dropped on 92 at extra cover by Mashrafe Mortaza off Elias Sunny. Brendon McCullum went on to smash his second T20 century in the same over and Elias Sunny suffered for 1 six and 2 fours from him. McCullum became the only player to score two hundreds in the shortest version of the game and the highest run scorer in a match as well.

Brendon McCullum was gone on the last ball of the innings for 123 runs off just 58 deliveries with 7 grand sixes and 11 fours. Ross Taylor remained unbeaten for 14 as the Black Caps amassed 191 runs for the loss of three wickets.

Abdur Razzak was the top wicket taker with two and Mashrafe Mortaza claimed one.

Bangladesh had a dismal start of their innings as the first wicket of Tamim Iqbal was lost without a run on board and Shakib Al Hasan became the next victim at 19 after scoring 11 runs.  Mohammad Ashraful and Mushfiqur Rahim resisted for a little while before both of them were sent back to the pavilion for 21 and 4 runs respectively.

The Bengal Tigers were reeling at 4-37 in 6.4 overs when Mahmudullah and Nasir Hossain joined together in the park. They played a rather defensive cricket as the runs were not easy to score against the calculated bowling of the Kiwis. The score was enhanced to 74 after 13 overs when Nasir Hossain added 11 runs in the next over with 1 six and 1 four. Mahmudullah was caught at long on by Kane Williamson off Nathan McCullum for 15 on the second ball of the 15th over as the score reached 87.

The next batsman, Ziaur Rahman, and Nasir Hossain speeded up the run rate and the boundaries were witnessed more often. Nasir Hossain attained his second T20 fifty on the first ball of the 18th over with a four but lost his wicket two balls later for 50 off 39 balls with 1 six and 6 fours. Bangladesh scored 132 runs with two wickets in hand when the required quota of 20 overs came to an end.

Kyle Mills and Tim Southee were the highest wicket takers with three wickets each whereas Jacob Oram and Nathan McCullum shared one wicket each.

It was the ninth consecutive loss for Bangladesh in the ICC World Twenty20 tournaments. New Zealand won the important match convincingly in the end by a big margin of 59 runs and attained two points.