An astonishing opening partnership of 124 runs between Imran Nazir and Mohammad Hafeez tyrannized Bangladesh as Pakistan powered themselves in the Super Eights.

Bangladesh scored a reasonable total of 175 runs with four wickets in hand at the close of the scheduled 20 overs. Pakistan piled up 178 runs for the loss of just two wickets with 8 balls to spare. 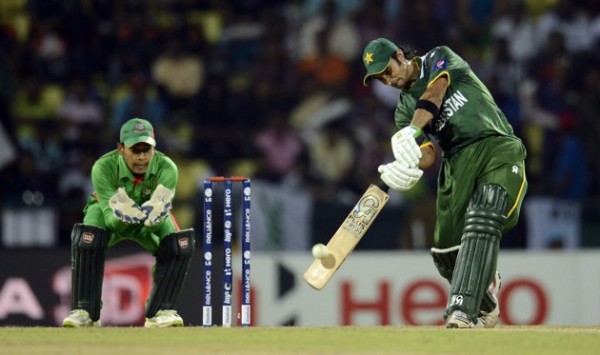 Imran Nazir – A crunchy knock of 72 from just 36 balls

Imran Nazir (Pakistan) was declared ‘Player of the match’ for his majestic knock of 72 off just 36 balls.

The salient features of the match

2-   Bangladesh has never beaten Pakistan in the shortest versions of the game.

4-   Imran Nazir hit the quickest fifty in the current tournament on 25 balls.

5-   The Green Shirts qualified for the Super Eight stage.

The 12th match of the ICC World Twenty20 was played at Pallekele International Cricket Stadium, on Tuesday, September 25, 2012. Bangladesh required a victory with a margin of minimum 36 runs against Pakistan to qualify for the Super Eight stage.

The Bangladesh Captain, Mushfiqur Rahim, won the toss and elected to bat on a good looking batting strip. The innings was initiated with authority from the Bengal Tigers openers, Tamim Iqbal and Mohammad Ashraful. The third over of the innings from Umar Gul cost him 17 runs with 3 fours from Tamim Iqbal. The first wicket associated for 34 runs in 3.2 overs as Mohammad Ashraful was clean bowled by Sohail Tanvir for 14.

The supreme all rounder of Bangladesh, Shakib Al Hasan, joined in next with Tamim Iqbal who hit a couple of fours in the fifth over. Shakib Al Hasan was in a different mood and dispatched three back to back fours to Sohail Tanvir in the following over. Tamim Iqbal unluckily ran out himself in a mix up for 24 off just 12 balls with 5 fours as the total reached 61 in 5.5 overs. Mushfiqur Rahim walked in the park next and hit the first six of the innings on the third ball of the eighth over.

Shakib Al Hasan took over from there and displayed a fine stroke play all around the ground. He was finally caught at long off by Umar Akmal off Yasir Arafat for a breezy knock of 84 off just 54 deliveries with two sixes and 11 fours. Bangladesh scored a reasonable total of 175 for the loss of 6 wickets in 20 overs.

Yasir Arafat was the most successful bowler by grabbing four wickets whereas Sohail Tanvir and Shahid Afridi claimed one wicket each.

Pakistan responded well as their skipper Mohammad Hafeez hit 2 fours in the first over. Imran Nazir, the other opener, was dropped on the first ball of the second over by Abul Hassan at mid on for one run. The let off proved costly for Bangladesh as the batsman gathered 14 runs in the fourth over with 1 six and 2 fours. The duo hit 15 runs in the next over with 1 six and 2 fours and the first fifty of the innings was also scored in the same over.

Imran Nazir completed his fifty on the second ball of the 10th over with a grand six. The half century was thrashed on 25 mere balls which was the fastest fifty in the tournament so far. The hundred of the innings was posted on board in the 11th over as Mohammad Hafeez sent the ball out of the fence twice in the 12th over. The thrilling opening partnership concluded at 124 in 13.3 overs when the crunchy innings of Imran Nazir came to an end. He hammered 72 runs off 36 balls with 3 towering sixes and 9 well timed fours.

Mohammad Hafeez departed after the addition of two runs to the total at his personal feat of 45 from 47 balls with 6 fours. The in-form batsmen, Nasir Jamshed and Kamran Akmal joined in the centre and kept the score board flowing. Nasir Jamshed hit a six on the second ball of the 16th over as the Green Shirts reached 141 and qualified for the Super Eights. Abul Hasan was punished for 19 runs by the two batsmen with 1 six and 3 fours in the same over.

Nasir Jamshed remained unbeaten for 29 off 14 balls with 2 sixes and even fours. Kamran Akmal was at the other end for 22 from 15 deliveries with 4 fours as Pakistan blasted 178 runs in 18.4 overs with eight wickets in hand.

Abul Hasan was the only successful bowler to secure two wickets for 33 runs.

Pakistan won the important encounter authentically by a big margin of eight wickets and entered the Super Eights.