Shane Watson crippled Ireland with his thundering all round performance in the 2nd game of the ICC World Twenty20 as Australia clinched the win comprehensively. 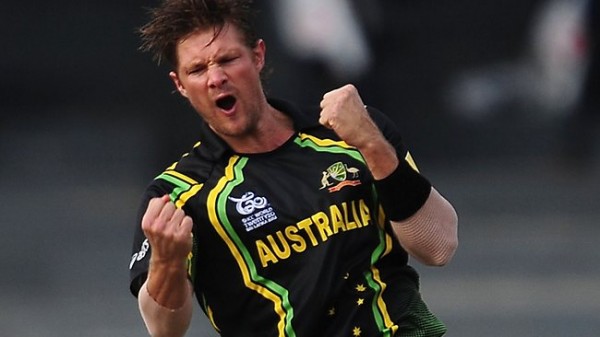 Shane Watson – ‘Player of the match’ for his all round performance

Shane Watson (Australia) was declared ‘Player of the match’ after he grabbed three wickets and thrashed 51 runs.

Earlier, the captain of Ireland, William Porterfield, won the toss and opted to bat first. The decision bounced back as both their openers went back to the pavilion for 15 mere runs in 3.3 overs. Ed Joyce and Niall O’Brien got together in the centre, tried to establish the innings and the first hit a couple of fours in the fifth over. The score was taken to 25 when Joyce was gone for 16 runs and eight runs later Gary Wilson was declared leg before wicket for just five runs.

Ireland was struggling at 4-33 in 7.2 overs as Niall O’Brien and his younger brother, Kevin O’Brien, tried to stabilise the innings. The first fifty of the innings was attained in the 11th over as Kevin O’Brien hit two fours in the 12th over and sent the ball out of the fence twice two overs later. The duo scored the fifty of the partnership in the 15th over but Niall O’Brien was clean bowled by Shane Watson for 20 off 24 balls with 2 fours. The fifth wicket fell at 85 and one run later Kevin O’Brien was caught behind by the wicketkeeper, Matthew Wade off Shane Watson for 35 off 29 deliveries with 5 fours.

Alex Cusack and Nigel Jones remained unbeaten for 15 and 14 runs respectively as Ireland reached 123 with three wickets in hand at the end of the 20th over.

Shane Watson was the highest wicket taker with three, Mitchell Starc held two whereas Glenn Maxwell and Brad Hogg claimed one wicket each.

Australia opened the innings in an authentic manner with their attacking openers, David Warner and Shane Watson. Trent Johnston was punished severely by Watson in the fourth over with 1 six and two fours and Warner also got one four in the same over. The first rapid fifty of the innings was scored in the sixth over and Ireland got the initial breakthrough when David Warner lost his wicket for 26 off 23 balls with 4 fours.

The first wicket fell at 60 in 7.1 overs as the most experienced batsman of the Kangaroos, Michael Hussey appeared in the centre. Watson was dropped at 29 runs by Paul Stirling on his own bowling on the third ball of  the 9th over and the batsman got 11 runs by the end of the same over with 1 six and 1 four. Shane Watson struck his eighth T20 in the next over by a grand six over deep midwicket but was unluckily run out in the 11th over for 51 off just 30 balls with 3 lofty sixes and 5 fours.

Ireland snatched the second wicket at 91 and four runs later Michael Hussey was gone for 10. Cameron White was at the crease for 22 off 19 balls with 3 fours as Australia hammered 125 runs for the loss of three wickets in 15.1 overs.

George Dockrell and Kevin O’Brien were the only successful bowlers of Ireland with one wicket each.

Australia made a great start of the tournament by winning their first game by a huge margin of seven wickets and earned two valuable points. 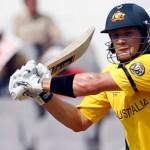 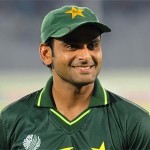 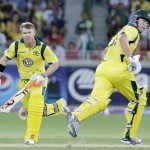