A scintillating unbeaten innings of 64 off 29 mere balls from James Faulkner took his side from the jaws of defeat against India in the third ODI at Chandigarh.

The Blue Shirts scored 303 runs for the loss of nine wickets in the measured 50 overs and the Kangaroos piled up 304 with four wickets in hand and three balls to spare.

James Faulkner (Australia) was announced ‘Player of the match’ for his stunning batting down the order.

The third One Day International of the seven match series was played on Saturday, October 19, 2013, at Punjab Cricket Association Stadium, Mohali, Chandigarh.

Earlier, George Bailey won the toss for the Kangaroos and preferred to field first. The Blue Shirts lost their first wicket at 14 when Shikhar Dhawan was gone for 8. The man in form, Virat Kohli, got in next and started picking the boundaries with Rohit Sharma. The latter became the next victim at 37 in 6.6 overs, he was replaced by Suresh Raina as Kohli hit 4 fours in the coming overs and Raina got two boundaries. Mitchell Johnson got rid of two competent batsmen on the successive deliveries in the 13th over. Raina and Yuvraj Singh were caught behind by Brad Haddin for 17 and 0 runs on the fifth and sixth ball.

MS Dhoni, walked in next and opened his account with a four whereas Kohli kept on consolidating at the other end. They were unable to hit any boundary in eight overs as Virat Kohli reached his 26th ODI fifty in the 25th over. The fifth wicket partnership was dislodged at 148 in 29.4 overs as Kohli was caught behind by Haddin off Glen Maxwell for 68 from 73 balls with 9 fours. Ravindra Jadeja followed him six runs later for just two as Ravichandran Ashwin settled in with MS Dhoni who attained his half century fours in the 37th over. The latter hit 1 six and another 2 fours while Ashwin gathered 3 boundaries before he became the fourth victim of Johnson for 28. Dhoni continued with his assault and blasted his 9th ODI century with two back to back fours in the 48th over. He was dropped at 105 and remained unbeaten for 139 off 121 with 5 towering sixes and 12 well timed fours as the Men in Blue smashed 303 with one wicket remaining after 50 overs.

Mitchell Johnson was the highest wicket taker with four whereas Clint McKay, Shane Watson, Xavier Doherty and Glenn Maxwell shared one wicket each.

Phillip Hughes along with Aaron Finch got off to a nice beginning by scoring 64 runs in 10 overs with 6 fours from the latter and 4 from his partner. Hughes was caught behind by Dhoni off Vinay Kumar four runs later for 22 as the experienced Shane Watson came in the park. Finch departed 14 runs later for 38 when he was declared leg before wicket off Vinay Kumar. George Bailey took guards next whereas Watson was struggling at the other end and was dismissed cheaply for 11 as the total touched 88 in 19.1 overs.

Adam Voges associated with Bailey, they started the repair work and accumulated 12 runs in the 27th one with 2 fours. Bailey hit the first six of the innings two overs later and they crossed the 150 runs mark in the 33rd over. The partnership was enhanced to 171 when George Bailey was adjudged lbw off Vinay Kumar for 43 from 60 with 1 six and 4 fours. The visitors were reeling at 5-174 in 36.6 overs as Bradd Haddin joined in with Voges who grasped his 4th ODI half century in the 39th one. Haddin got 17 runs in the 40th over with 1 six and 2 fours but went back to the pavilion for 24. The Aussies required 91 runs to win from the last 51 deliveries when James Faulkner got together with Voges.

Faulkner made his intentions clear by hitting 1 six and 2 fours in the coming overs and the target was reduced to 44 from 18. He changed the complexion of the game by punishing Ishant Sharma for 30 runs in the 48th over comprising 4 giant sixes and 1 four. James Faulkner went past his second ODI fifty in the process and dispatched the winning six on the third ball of the last over. He secured his end for 64 off just 29 deliveries with 6 super sixes and 2 fours, Adam Voges was at the other end at 76 from 88 with 7 fours as Australia hammered 304-6.

Vinay Kumar held two wickets whereas Bhuvneshwar Kumar, Ishant Sharma and Ravindra Jadeja chipped in with one wicket each.

Australia grabbed the thrilling third One Day International with a margin of four wickets and leads the seven game series 2-1. The fourth match will be held on October 23, 2013, at JSCA International Stadium Complex, Ranchi. 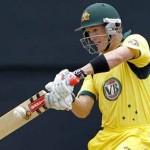 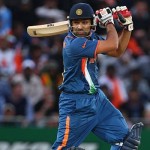 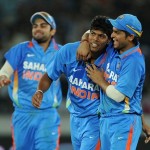