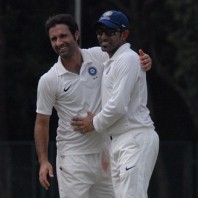 The spinners from both sides ruled by taking 14 wickets out of 20 fell in the two day tour match between the Australians and the Indian Board President’s XI.

The Australians were bowled out for 241 runs while consuming 88.3 overs in their first innings followed by 15 without losing any wicket in four overs. The only innings of the Indian Board President’s XI was folded back at 230 in 68.3 overs.

Earlier, the captain of the Australians, Matthew Wade, won the toss on day one and decided to bat first. Ed Cowans and Usman Khawaja opened the innings positively and they negotiated the speedy spell of Shami Ahmed and Parvinder Awana with ease while keeping the score board moving at a reasonable speed. The duo took the score to 77 in 25.5 overs when the leg spinner, Sarabjit Ladda  gave a first break through to his side by removing Usman Khawaja for 32 off 73 balls with 5 fours.

Matthew Wade got together with Cowan who completed his fifty and the second wicket partnership was lifted to 109 in 34.1 overs. Ed Cowan became the first victim of the right-arm off spinner, Parvez Rasool for 58 off 109 deliveries with 1 six and 8 fours. Steven Smith replaced Cowan and carried on consolidating the innings with Wade. They found it difficult to score the runs freely against the spinners but enhanced the score to 167 when Parvez Rasool struck again and got the wicket of Matthew Wade for 35.

Steven Smith played a patient knock of 41 runs from 107 with just 3 fours as the middle and lower order batting was captured completely by Parvez Rasool. The entire Australians side was sent back to the dressing room by the quality spin bowling of the home side for 241 in 88.3 overs. 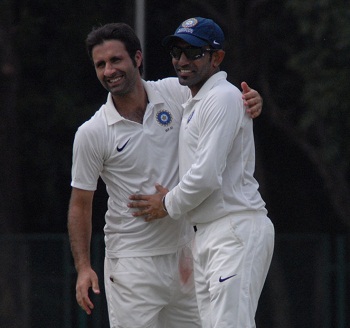 Parvez Rasool (left) – Seven wickets with his off spin bowling

Parvez Rasool was the most impressive bowler and grabbed seven wickets, Sarabjit Ladda got two whereas Stuart Binny claimed one wicket.

The Indian Board President’s XI went into bat with their captain, Abhinav Mukund, along with Robin Uthappa. The pair shared an opening partnership of 37 runs in 13.4 overs when the spinner from the visiting side, Nathan Lyon, got the first wicket as Uthappa lost his wicket for 24 runs. Mandeep Singh was unable to impress and was gone for three runs as Ambati Rayudu appeared in the center. Mukund scored 21 runs and the hosts were in difficulty at 4-61 in 25.3 overs.

Rayudu took over the challenge of the rival bowlers and stood as a rock, played his shots as and when required. The middle order crumbled and the Indian Board President’s XI was reeling at 6-132 as Parvez Rasool got together with Rayudu who was going great guns. The first was playing an aggressive innings as Ambati Rayudu achieved his fifty. The seventh wicket association accumulated 67 runs and enhanced the score to 199 in 61.5 overs when Parvez Rasool was caught by Glenn Maxwell for 36 off 54 with 1 six and 4 fours.

Moises Henriques was the highest wicket taker with four, the right-arm off spinner, Nathan Lyon, secured three whereas James Pattinson, Glenn Maxwell and Ashton Agar shared one wicket each.

The Australians scored 15 runs in four overs when the match was called off on day two.

The practice match was vanquished by the spinners as the batsmen found it difficult to show their power in the game which indicated the importance of spinners in the forthcoming Test series between India and Australia.