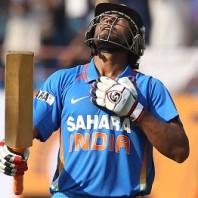 England humiliated by India in the second ODI

An all-round performance by the Indian team led by Ravindra Jadeja, well assisted by MS Dhoni, Suresh Raina and their bowlers, let down England In the 2nd ODI.

India amassed 285 runs for the loss of six wickets in the metered 50 overs and England was bowled out for just 158 runs in 36 overs. 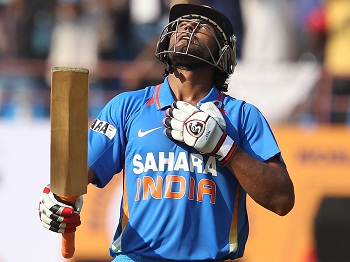 Ravindra Jadeja – An Impressive all round performance

Ravindra Jadeja (India) was declared ‘Player of the match’ for his superb performance in the game. He smashed unbeaten 61 runs off just 37 deliveries and grabbed two wickets as well.

The second One Day International of the five match series was played on Tuesday, January 15, 2013, at Nehru Stadium, Kochi.

Earlier, MS Dhoni, the Indian captain, won the toss and opted to bat on a strip which looked favourable for batting. They lost both openers, Gautam Gambhir and Ajinkya Rahane, at just 18 runs in 4.3 overs. Virat Kohli and Yuvraj Singh joined in the center and controlled the dismal situation while ticking the score board. Yuvraj Singh was the most aggressive of the two and hit 5 fours on the first 29 balls he faced. He was declared leg before wicket off James Tredwell for 32 as the score touched 71 runs.

Suresh Raina came in next and hit the first six of the innings on the last ball of the 18th over and Kohli followed him five overs later. The total was enhanced to 119 in 26.2 overs as Kohli lost his wicket for 37 runs and was replaced by MS Dhoni. The pair started commanding the innings and Raina dispatched his 26th ODI fifty in the 36th over with a four. He became the next victim at 174 in 39.2 overs after contributing 55 off 78 balls with 2 sixes and even fours as the all-rounder, Ravindra Jadeja, joined in with Dhoni. The run rate picked up and the second hundred of the innings appeared on board in the 43rd over with 1 six and 1 four.

Jadeja punished Chris Woakes for 14 runs with 1 six and 2 fours in the 45th over as Dhoni attained his 48th ODI fifty two overs later with 2 fours. MS Dhoni was caught by Joe Root off Jade Dernbach for 72 from 66 deliveries with 2 big sixes and 7 fours. Jadeja added 1 six and 2 fours on the last three deliveries and completed his sixth ODI half century as well. He remained unbeaten for 61 off 37 mere balls with 2 smart sixes and 8 fours as the Blue Shirts thrashed 285 runs with four wickets still in hand at the end of the 50th over.

Steven Finn  and Jade Dernbach were the top wicket takers with two wickets each whereas Chris Woakes and James Tredwell shared one wicket each.

England lost their first wicket at Just four runs as Kevin Pietersen associated with his skipper, Alastair Cook who hit 3 fours in a couple of overs in the third and fourth overs and Pietersen followed him with 3 fours in the 8th over. The latter was severe on the bowlers and added another 2 fours in the 10th over as Alastair Cook was held lbw off Bhuvneshwar Kumar on 17. The young gun, Bhuvneshwar Kumar, struck twice in the 15th over and got rid of Kevin Pietersen for 42 and Eoin Morgan faced a duck.

The visitors were reeling at 4-73 when Craig Kieswetter and Samit Patel tried to put some life back in the innings. The Men in Blue took command of the game and the batsmen found it difficult to score the runs freely. The first hundred of the innings was displayed on board in the 25th over as Kieswetter was caught by Raina at midwicket off Ravichandran Ashwin for 18 runs. Patel was the only batsman who defended as the Indian bowlers became unplayable. Ravindra Jadeja multiplied the miseries of the tourists when he dismissed Joe Root after the batsman had scored 36 and Chris Woakes without any run in the 31st over.

Samit Patel secured his wicket for 30 off 29 balls with 1 six and 3 fours as the entire English innings was rolled back for 158 runs with 14 overs to spare.

Bhuvneshwar Kumar and Ravichandran Ashwin were the highest wicket takers with three wickets each, Ravindra Jadeja got two whereas Shami Ahmed claimed one wicket.

India won the match comprehensively with a huge margin of 127 runs and the five match series is levelled at 1-1. The third ODI of the series will be played on January 19, 2013, at HEC International Cricket Stadium Complex, Ranchi.