England started their tour on a positive note as their batsmen gained an advantage while Alastair Cook and Samit Patel registered their centuries in the game.

The inaugural tour match of the England tour of India was played between India A and England XI at Brabourne Stadium, Mumbai, on October 30, 31 and November 1, 2012. 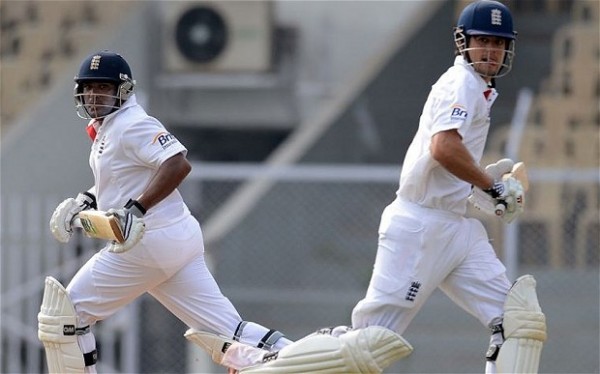 Alastair Cook and Samit Patel – Initiated the tour with a bang

The skipper of India A, Suresh Raina, won the toss and preferred to bat first on a placid batting strip. Abhinav Mukund proved his worth as an opener while a couple of wickets fell early when Yuvraj Singh joined him. They played entertaining cricket with brisk scoring and took the score to 113 as Mukund was gone for 73 off 83 balls with 16 fours.

Raina managed 20 runs and Yuvraj Singh played a solid innings of 59 off 80 balls with 4 huge sixes and 7 fours. The young Manoj Tiwary strengthened his claims for a Test spot while holding the middle order batting together with some valuable partnerships. He contributed 22 runs for the sixth wicket with Wriddhiman Saha and accumulated another 110 runs with Irfan Pathan. The latter scored 46 off 83 with 2 sixes and 5 fours and Manoj Tiwary was unlucky to miss his ton by just seven runs. Tiwary scored 93 from 150 deliveries with 12 fours as India A was bowled out for 369 runs in 90.1 overs.

Tim Bresnan and Graeme Swann were the highest wicket takers with three each, James Anderson held two and Samit Patel claimed one wicket.

England XI lost their first wicket for just two runs when Jonathan Trott associated with his captain, Alastair Cook, and both batsmen stabilised the innings. They added 95 runs for the second wicket when Trott was clean bowled by Raina for 56 off 95 with 9 fours. Cook secured his end with determination as a couple of wickets fell quickly and the visitors reached 4-133 in 38 overs. The promising all-rounder, Samit Patel came in the park next as Cook was going firm at his end while scoring at a reasonable pace.

The duo took a little time to settle down and then dictated their terms to a solid looking bowling attack of the rival team. Suresh Raina deployed eight bowlers to separate the two batsmen but remained unsuccessful for a long time. The pair contributed a 169 runs partnership for the fifth wicket and Alastair Cook became the fifth victim after smashing 119 runs off 269 comprising 14 fours. Samit Patel hammered his century next and was dismissed for 104 off 173 balls with 14 fours.

Matt Prior sparkled by scoring 51 off 52 deliveries with 9 fours as Tim Bresnan remained unbeaten for 33. The innings of England XI came to an end for 426 in 119.5 runs and they gained a psychological first innings lead of 57 runs.

Yuvraj Singh proved his all round performance with the ball by grabbing five wickets, Ashok Dinda got two whereas Vinay Kumar and Suresh Rains shared one wicket each.

India A suffered a blow when Abhinav Mukund was gone for just three runs as Murali Vijay and Ajinkya Rahane defended well since both of them went out cheaply in the first innings. They added 65 runs together when Murali Vijay was caught by Graeme Swann off James Anderson for 32. Rahane completed his fifty and became the fifth victim after scoring 54 runs as India XI reached 124 for the loss of four wickets in 40 overs when the match concluded.

The first tour match ended in a draw but England batsmen boosted their confidence with positive knocks which will benefit them during the ongoing trip.