An excellent all round performance by Yuvraj Singh earned India a much needed victory against England in the first T20 of the two match series at Pune.

Yuvraj Singh (India) was declared ‘Player of the match’ for his awesome all round performance in the game.

The first Twenty20 of the two match series was played on Thursday, December 20, 2012, at Subrata Roy Sahara Stadium, Pune.

Earlier, MS Dhoni won the toss for India, offered the batting to England and they sent in Michael Lumb and Alex Hales to open the innings. Ashok Dinda started bowling for India and conceded 9 runs as Hales hit two consecutive boundaries. Lumb was unable to score any run in the second over which was bowled by Ravichandran Ashwin and Hales added another 11 runs in the following over with 2 fours. Michael Lumb was declared leg before wicket off Ashwin on the first ball of the fourth over for one off 10 balls as Luke Wright walked in the centre.

The Hale storm was continued by Alex Hales as he hit 11 runs in the sixth over with 1 six and 1 four and the first fifty of the innings was scored in the seventh over with 3 fours from Wright and Hales. The 50 runs partnership for the second wicket was recorded on the fifth delivery of the 8th over with a six from Wright and Hail scored his fourth T20 fifty off 26 balls in the next over. The third wicket fell at 89 after 10.1 overs when Luke Right became the first victim of Yuvraj Singh for 34 off 21 with 1 six and 3 fours.

Yuvraj Singh brought India back in the game when he got rid of Alex Hales and the England captain Eoin Morgan in the 13th over at 100 runs. Hales smashed 56 off just 35 balls with 2 huge sixes and 7 fours as Samit Patel and Jos Buttler got together in the centre. Patel scored 24 and Joss Buttler powered unbeaten 33 quick fired runs off 21 deliveries with three well timed sixes as England reached 6-157 in 20 overs.

Yuvraj Singh got his best figures in T20 by grabbing 3-19, Ashok Dinda held two whereas Ravichandran Ashwin claimed one wicket.

The Indian reply begun in a nice way by Gautam Gambhir along with  Ajinkya Rahane and they gathered 21 runs in the first two overs with 1 six and 2 fours. The duo got 16 runs in the next over with a couple of fours and one six as Gambhir was caught by Hales off Tim Bresnan for 16 off even balls with 3 fours on the third delivery of the fifth over. Bresnan struck again three balls later when Ajinkya Rahane was gone for 19 scored from 13 balls with 2 huge sixes.

The Blue Shirts lost their second wicket at 44 runs in 5 overs as Virat Kohli and Yuvraj Singh took over the challenge of scoring brisk runs. Yuvraj Singh punished Danny Briggs for 17 runs with 2 grand sixes and 1 four as Kohli went on consolidating from his end. The third wicket associated for 49 runs off just 30 deliveries when Yuvraj Singh was caught smartly by Stuart Meaker at deep square leg boundary on the bowling of Luke Wright for 38 scored from 21 balls with 3 mighty sixes and 2 fours. Virat Kohli went back to the pavilion as the score reached 110 in 12.1 overs at his personal contribution of 21 when Suresh Raina and MS Dhoni joined in the park.

The Men in Blue required just 26 runs from the last 30 balls at a required run rate of 5.33 which was very much achievable. Suresh Raina played a speedy innings of 26 off 19 with 1 six and 1 four when he was run out at 148 runs. MS Dhoni was at the crease for 24 off 21 balls with 2 fours as the home side thrashed 158 runs for the loss of five wickets and 13 balls to spare.

Tim Bresnan was the top wicket taker with two whereas Stuart Meaker and Luke Wright shared one wicket each.

India clinched the first Twenty20 with a big margin of five wickets and leads the two match series 1-0. 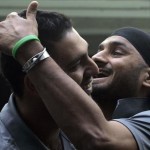 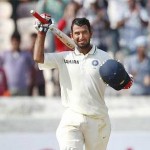