The sixes showered from the bat of Yuvraj Singh and the powerful Pakistani bowling attack looked ordinary against him as India won the second T20 easily.

India hammered 192 runs for the loss of five wickets and Pakistan scored 181 runs with three wickets in hand after the allotted 20 overs.

Yuvraj Singh (India) was declared ‘Player of the match’ for his attacking knock of 72 off just 36 balls.

Mohammad Hafeez (Pakistan) was declared ‘Player of the series’ for his outstanding batting in the series with two back to back fifties.

The second and final Twenty20 of the series was played on Friday, December 28, 2012, at Sardar Patel Stadium, Motera, Ahmedabad.

Earlier, Mohammad Hafeez, the captain of Pakistan won the toss and opted to field first, though the wicket looked perfect for batting. Gautam Gambhir and Ajinkya Rahane opened the innings for India in great style by getting 17 runs off the first two with 3 fours. Rahane hit two fours in the fourth over and Gambhir got three consecutive boundaries in the next over off Umar Gul who claimed him leg before wicket on the next delivery for 21. The openers contributed 44 runs in 4.5 overs and nine runs later, Umar Gul caught and bowled Ajikya Rahane for 28 off 26 balls with 4 fours.

Virat Kohli and Yuvraj Singh associated at the wicket and kept on pushing the score with odd boundaries. Kohli added 2 fours in the 11th over off Shahid Afridi but was unluckily run out with a superb direct throw from Saeed Ajmal for 27 as score reached 88 in 12 overs. The Indian skipper, MS Dhoni joined together with Yuvraj Singh and the pair added 17 runs off Afridi with 1 six and 2 fours. The first hundred of the innings was displayed on board in the 13th over as Yuvraj Singh dispatched another six on the first ball of the 15th over from Saeed Ajmal.

The next over saw the addition of 15 runs with 2 fours from Dhoni and the batsmen accumulated 11 runs as Yuvraj sent the ball out of the boundary twice in the 17th over. Yuvraj Singh rushed to his sixth T20 fifty with two supreme sixes off Sohail Tanvir who ended up with 18 runs off his last over. The capacity crowd of Ahmedabad witnessed a rain of sixes from the blade of Yuvraj Singh when he blasted three herculean sixes in the last over off the master off spinner, Saeed Ajmal.

The fourth wicket partnership produced 97 runs from mere 44 balls when Yuvraj Singh was finally caught at long-on by Shoaib Malik off Umar Gul. Yuvraj Singh thrashed 72 off just 36 deliveries with 7 towering sixes and 4 fours and that was his highest score in the shortest format of the game. Umar Gul struck back again on the fifth ball of the last over when MS Dhoni was clean bowled for 33 off 23 with 4 fours. The Men in Blue hammered 192 runs with five wickets in hand at the end of the 20th over.

Umar Gul was the only impressive bowler out of six who grabbed four wickets after conceding 37 runs in his allotted quota of four overs.

Pakistan went into bat with the young duo of Nasir Jamshed and Ahmed Shehzad who started off with nine runs from the first two overs. Nasir Jamshed got 11 runs in the third over with 1 six and 1 four as Ahmed Shehzad hit the first six of his innings in the next over which produced 12 runs. The batsmen kept on cruising by getting 3 fours in the fifth over and the first fifty of the innings was attained in the next over. Nasir Jamshed was dropped at 40 on the second ball of the 10th over off Ravichandran Ashwin but was gone three balls later for 41 off 32 with 1 six and 4 fours.

The first wicket was lost at 74 in 9.5 overs and the newcomer Umar Akmal opened his account with a six. Ahmed Shehzad became the next victim at 84 when he was smartly stumped by Dhoni off Yuvraj Singh for 31 off 29 with 1 six and 3 fours. Mohammad Hafeez joined in next with Umar Akmal and they kept the chase alive with sensible batting. Yuvraj Singh gave away 14 runs in the 13th over with 2 fours as Mohammad Hafeez sent the ball flying over the rope twice in the next over off Ashwin. Mohammad Hafeez continued with his blistering form by hitting 2 fours in the 15th over and got another six in the next over.

The Green Shirts required 47 runs from the last 24 deliveries as Umar Akmal was clean bowled by Ashok Dinda on the second ball of the 17th over for 24. Mohammad Hafeez achieved his consecutive fifty of the tour on the second ball of the 18th over with a four on 23 balls. Shahid Afridi was gone for 11 and the target was reduced to 26 off the remaining 12 balls. Mohammad Hafeez was caught by Suresh Raina off Ashok Dinda for 55 from just 26 balls with 3 lofty sixes and 6 well timed fours. Pakistan played well but managed 181 runs for the loss of seven wickets.

Ashok Dinda was the star performer with three wickets whereas Bhuvneshwar Kumar, Ravichandran Ashwin and Yuvraj Singh shared one wicket each.

India won the match by a margin of 11 runs, levelled the two match series at 1-1 and the trophy was shared by the two teams. 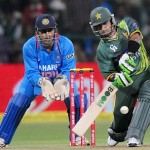 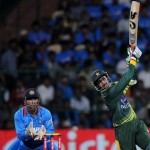