The Carribeans scored 211 runs for the loss of nine wickets in the scheduled 50 overs and India chased the target in 48.5 overs with one wicket in hand. 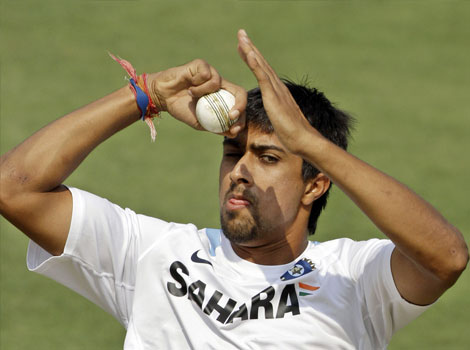 Rohit Sharma was declared ‘Player of the match’ due to his match winning innings of 72 runs.
The stand in Captain for India, Virender Sehwag started the day being lucky with coin and put West Indies in to bat first.

He got the immediate reward by claiming the first wicket at the total of 18 runs in 4.2 overs when Vinay Kumar got rid of Adrian Barath.

The Windies continued losing wickets and their third wicket was gone at 52 runs in 9.6 overs.

The ever promising Darren Bravo and Danza Hyatt put their heads down and consolidated the innings for the tourists.
Bravo directed the ball twice rolling out of the circle in the 18th over to Varun Aaron but got a lucky escape when Ravichandran Ashwin dropped his return catch on the second ball of the 21st over.

The duo batted superbly and accumulated 75 runs partnership for the fourth wicket before Hyatt was unluckily runs out at his personal score of 31 runs.

Bravo achieved his fifty in 29th over but was bowled after scoring 60 runs off 74 balls which comprised six fours.
The fifth wicket was lost at 154 runs in 34.4 overs but the late order batsmen could not resist in front of the calculated bowling of India.

They were able to score 211 runs after losing nine wickets in the allotted 50 overs.

Umesh Yadav and Aaron were the top wicket takers with two wickets each, Vinay Kumar, Ashwin, Ravindra Jadeja and Suresh Raina claimed one wicket each.

India innings was opened by Parthiv Patel and Sehwag and they gave a flying start by collecting 15 runs in the first over mainly because of rival bowling and fielding.

Patel tried to accelerate the innings and punished Anthony Martin thrice for fours in fourth over but became the first success for the Carribeans once caught at point by Martin off Kemar Roach for 12.

The first wicket fell at 37 runs off 4.1 overs and Gautam Ghambir followed him after three deliveries at his individual score of four runs.

West Indian bowlers dominated the innings and got themselves back in the game by grabbing top five wickets at 59 runs in 11.2 runs when Rohit Sharma and Ravindra Jadeja gave them resistance.

They shared a valuable partnership of 83 runs for the sixth wicket when Jadeja was goner after scoring 38 runs.
Sharma had couple of good partnerships before he went back to the pavilion after a breezy knock of 72 runs off 99 balls with the help of one six and three fours.

He was gone at 201 runs and the ninth wicket was lost without adding any run in the total and the match became wide open (46.1 overs).

Arun and Yadav were at the crease as lot of tension mounted all around as India still required nine runs to win the match at the end of the 48th over.

Aaron smashed two fours on the second and fifth ball of the 49th over bowled by Darren Sammy and brought home a thrilling victory.

Roach was the highest wicket taker with three, Andre Russell claimed two as Martin, Sammy and Kieron Pollard shared one wicket each.

India won the match by just one wicket and are leading the series 1-0, the second ODI will be played at Visakhapatnam, on December 2, 2011.