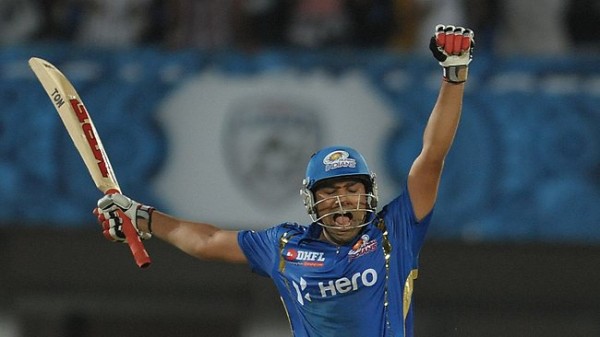 Mumbai Indians plundered 182 runs for the loss of just one wicket in the metered 20 overs with the assistance of a stunning unbroken partnership of 167 runs for the second wicket between Sharma and Herschelle Gibbs. Mumbai Indians scored 155 runs with six wickets in hand and were unable to achieve the target.

Rohit Sharma (Mumbai Indians) was declared ‘Player of the match’ for his thundering unbeaten knock of 109 from just 60 balls.

The 58th match of the Indian Premier League was played on Saturday, May 12, 2012 at Eden Gardens , Kolkata.

Earlier, Harbhajan Singh, the captain of Mumbai Indians, won the toss and elected to bat at the home strip. Herschelle Gibbs made a rising start when he punished Brett Lee for three successive fours in the second over. They  suffered an early blow when the legendary batsman Sachin Tendulkar was stumped by Manvinder Bisla off Shakib Al Hasan for just two runs as the score board displayed 15 runs.

The young gun, Rohit Sharma joined in next with Gibbs and the pace of scoring was instantly enhanced by the duo. Sharma dispatched 14 runs in the fifth over off Shakib with a couple of fours and one six as the first fifty of the innings was scored in the seventh over. Sharma was furious over the bowling attack and achieved his fifty in the 11th over bowled by Jacques Kallis which comprised two fours and a six. The boundaries kept on flowing from the bat of Sharma and the bowlers of Kolkata Knight Riders were at his mercy.

Rohit Sharma punched his fifty in the 17th over with two fours and a six again as Gibbs scored his fifty in the same over. Sharma remained unbeaten for 109 off just 60 balls with 5 towering sixes and 12 powerful fours as Herschelle Gibbs contributed 66 runs from 58 deliveries with 2 sixes and 7 fours. Mumbai Indians thrashed 182 runs without any further loss at the end of the 20th over and gave a tough challenge to the rival team.

Kolkata Knight Riders made a horrible start when their skipper, Gautam Gambhir was clean bowled by Munaf Patel for a duck on the third ball of the innings. Their miseries were multiplied once the other opener, Manvinder Bisla was gone for just one run and they were reeling at 3 runs for the loss of 2 wickets.

Jacques Kallis and Manoj Tiwary held the innings together with some sensible batting and the first started off with a couple of boundaries in the third over. Tiwary kept his end secured while adding useful runs with occasional boundaries and enhanced the score to 60 runs in 9.4 overs. He was declared leg before wicket off Kieron Pollard for 27 runs off 25 balls with 4 fours as Yusuf Pathan came in the centre.

The duo accelerated the run rate by accumulating 15 runs in the 12th over with a six from each batsman followed by 13 in the next over with two fours. The first hundred of the innings was posted in the 14th over and Kallis attained his fifty on the second ball of the 16th over. Pathan was the most aggressive of the two and  sent the ball out of the fence few times while keeping the chase alive.

Kolkata Knight Riders required 44 runs of the last 12 balls and the calculated bowling by Lasith Malinga in the 19th over gave away just six singles and made the target difficult. The fourth wicket association contributed 91 runs when Kallis lost his wicket for 79 off 60 balls with 3 sixes and 7 fours on the fifth ball of the 20th over. Yusuf Pathan was at the crease for 40 off 31 deliveries with one six and two fours as his team managed 155 runs with six wickets in hand and lost the match by 27 runs.