Rajasthan Royals scored 141 runs for the loss of six wickets as Delhi Daredevils achieved the target by blasting 144 runs with six wickets in hand and 28 balls to spare.

Pawan Negi (Delhi Daredevils) was declared ‘Player of the match’ for his outstanding bowling spell of 4- 18 runs.

The 43rd match of the Indian Premier League was held at Sawai Mansingh Stadium, Jaipur, on Tuesday, May 1, 2012.

Earlier, Rahul Dravid, the skipper of Rajasthan Royals won the toss and went into bat with Ajinkya Rahane on a positive note by gathering 11 runs in the second over with a couple of fours by them. Dravid got two fours in the next over and Rahane chipped in with one in the third over as the first fifty of the innings was accomplished in the fifth over. They maintained the run rate and reached at 70 runs at the end of the 8th over when Rahane was caught by Virender Sehwag off Pawan Negi for 42 from 32 balls with seven fours.

Dravid secured one end when Delhi Daredevils bowlers struck back at regular intervals and the batsmen found it hard to score the runs as the wickets started crumbling. The next four batsmen were unable to catch the double figures and went back to the pavilion after adding 24 runs. Dravid became the sixth victim after scoring 57 runs off 43 deliveries with 7 fours on the first ball of the 19th over as Shreevats Goswami gave some resistance by contributing unbeaten 18. Rajasthan Royals managed 141 runs with four wickets in hand at the end of the allotted 20 overs.

Pawan Negi was the star performer with four wickets whereas Umesh Yadav and Morne Morkel claimed one wicket each.

Delhi Daredevils faced a setback on the third ball of their innings when Mahela Jayawardene was declared leg before wicket off Ankeet Chavan without any run on the board. The dashing Kevin Pietersen joined in with the in form Virender Sehwag and the duo opted for the attack straight away. Pietersen got a four on the first ball of the second over and Sehwag ended up with two of them followed by 3 consecutive fours in the next over.

The boundaries started showering from both ends and they pumped the score to 51 at the end of the fifth over. The bowling attack of Rajasthan Royals started looking ordinary and they were at the mercy of the charged batsmen as Sehwag created a record of thrashing five consecutive half centuries in the history of Indian Premier League. He achieved his fifty on the fifth ball of the 8th over by dispatching a six and the feat was registered on mere 20 balls with one six and 9 fours.

The explosive second wicket partnership amassed 96 runs in just 9.5 overs when Pietersen lost his wicket for 36 off 34 deliveries with one six and 3 fours. Virender Sehwag continued with his assault and became the fourth batsman to be dismissed for 73 off mere 38 balls with one six and 12 sweetly timed fours. He was gone as the score reached at 131 in 14.4 overs and Delhi Daredevils achieved the target on the second ball of the 16th over by smashing 144 runs without losing any further wicket.

Brad Hogg was the top wicket taker with two as Ankeet Chavan held one as no other bowler left any impression.

Points achieved by the two teams after the end of the 43rd match of the IPL 2012: 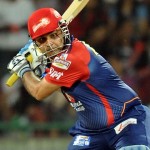 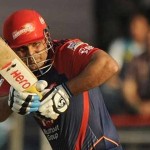