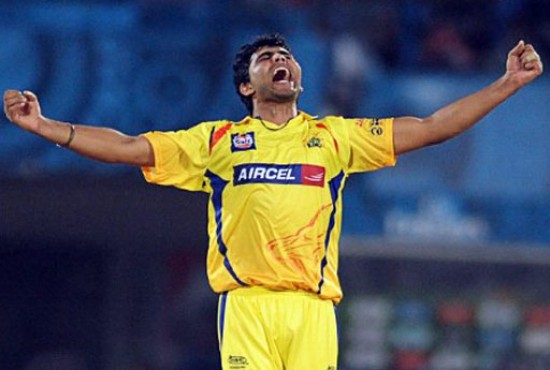 Ravindra Jadeja - 'Player of the match' for his all round performance

An all round performance by Ravindra Jadeja opened the doors of victory for Chennai Super Kings vs. Deccan Chargers in the IPL 2012.

Chennai Super Kings amassed 193 runs for the loss of 6 wickets in the measured 20 overs and Deccan Chargers were bowled out for 119 runs with 17 balls to spare.

The 6th Twenty20 match of the Indian Premier League 2012 was played in front of a capacity crowd who enjoyed the game thoroughly at Dr. Y.S.Rajasekhara Reddy ACA-VDCA Cricket Stadium, Visakhapatnam on April 7, 2012.

Earlier, Deccan Chargers Captain, Cameron White won the toss and preferred to chase and his decision paid off instantly when Chennai Super Kings lost their first wicket at just two runs. Fuf du Plessis and Suresh Raina tried to build up the innings as the first dispatched 18 runs in the fifth over off Manpreet Gony with one four and two sixes. They took the score to 42 when Suresh Raina was caught and bowled by Daniel Christian for 16.

Subramaniam Badrinath joined in next with Fuf du Plesis who believed in scoring by dispatching sixes but lost his wicket for 39 off 25 balls with 4 sixes and one four. It was the turn of Ravindra Jadeja who consolidated at one end as Badrinath was getting boundaries every now and then. They enhanced the score to 94 when the latter was gone for 25 off 20 balls as MS Dhoni became the next and was the fifth batsman to be dismissed at the total of 120 in 14.5 overs.

Dwayne Bravo came in the centre as Jadeja enhanced his scoring and reached at 46 after the 17th over and was unluckily got out hit wicket on the second ball of the next over for 48 from 29 deliveries with 3 sixes and even fours. Bravo took over from there and smashed two sixes in the 19th over followed by three more in the next. He remained unbeaten for 43 off mere 18 balls with 5 grand sixes as Chennai Super Kings thrashed 193 runs with four wickets still in hand at the end of the 20th over.

Dale Steyn and Daniel Christian were the top wicket takers with two wickets each whereas Ankit Sharma and TP Sudhindra shared one wicket each.

Deccan Chargers got off to a reasonable start as Daniel Harris and Shikhar Dhawan collected 21 runs in the first three overs. Harris earned two fours on the consecutive balls of the next over but was caught behind by Dhoni off Doug Bollinger for 15. The first wicket was lost at 32 and 13 runs later Dhawan was caught by Bravo on the bowling of Suresh Raina for 21 off 18 balls with 3 fours.

Parthiv Patel and Cameron White tried to mend the early loss and the run rate was geared up when White sent the ball out of the fence twice in the 10th over. The score was taken to 77 when Patel was clean bowled by Ravindra Jadeja for 20 off 17 deliveries with 3 fours. White became the next victim for 23 off 16 balls with one six and two fours after eight runs were added to the total.

Jadeja penetrated through the batting of Deccan Chargers as Ankit Sharma gave some resistance by scoring 15 runs. Five batsmen were unable to enter the double figures and their innings was folded back at 119 runs in 17.1 overs.

Chennai Super kings won the match convincingly by 74 runs and opened their account in the tournament with two points from even games.