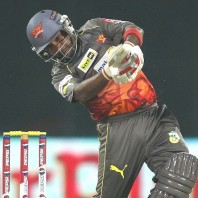 Sunrisers Hyderabad won a low scoring game vs. Delhi Daredevils in the final over on a bowling surface where a maximum of 30 runs were scored from any batsman.

Delhi Daredevils managed 114 runs after losing eight wickets in the required 20 overs and Sunrisers Hyderabad achieved the target by posting 115 runs on board with four balls to spare.

Amit Miahra (Sunrisers Hyderabad) was declared ‘Player of the match’ for his all round performance.

The 14th match of the Indian Premier League was played on Friday, April 12, 2013, at Feroz Shah Kotla, Delhi.

The captain of Delhi Daredevils, Mahela Jayawardene, won the toss and opted to bat first with the inclusion of the star opener, Virender Sehwag. David Warner was gone on the fourth ball of the first over as Jayawardene joined in with Sehwag and the second over witnessed the addition of 12 runs to the total with 1 six and 1 four. The score was taken to 25 in 4 overs when Ishant Sharma sent both batsmen towards the pavilion after they had scored 12 runs each. The home side was reeling at 6-65 in 13.3 overs when Irfan Pathan and Kedar Jadhav got together and crept to 76 in 16 overs.

The pair added 17 runs in the next over with 1 six and 1 four from Jadhav as Irfan Pathan was caught by Hanuma Vihari off Thisara Perera for 23. Kedar Jadhav remained unbeaten for 30 with 2 lofty sixes and 1 four as Delhi Daredevils scored 114 runs with two wickets remaining in 20 overs.

Dale Steyn, Ishant Sharma and Thisara Perera were the main wicket takers with two each whereas Anand Rajan and Amit Mishra held one scalp each. 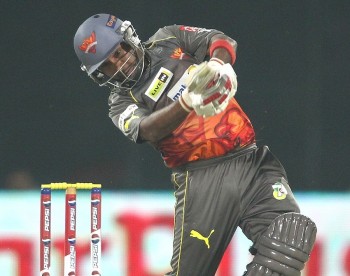 Amit Mishra – ‘Player of the match’ for his all round performance.

Sunrisers Hyderabad lost their first wicket at just two runs in the second over as their skipper, Kumar Sangakkara, associated with Parthiv Patel. The duo started picking up the boundaries in almost every over and got 3 boundaries in the sixth one. Parthiv Patel was caught and bowled by Shahbaz Nadeem for 19 as the score touched 46 in 7.4 overs and he was replaced by Hanuma Vihari. The run rate dropped immediately after the fall of the second wicket and the batsmen found it hard to score freely.

Kumar Sangakkara was caught by Sehwag at slip off Johan Botha for 28 scored from even deliveries with 4 fours. The rival bowlers came back in the game while picking up the wickets at regular intervals and Vihari was the fifth batsman who was destined towards the dressing room for 17 as the score reached 71 in 14.2 overs. Ashish Reddy and Thisara Perera kept the hopes alive for Sunrisers Hyderabad with their sensible batting and the first hit two back to back fours in the 16th over.

The score was escalated to 89 when Reddy was clean bowled by Morne Morkel for 16 as Amit Mishra walked in the centre and gathered seven runs in the 17th over with a four. Perera left the field after scoring just two runs but Mishra did not give up with the assistance of Dale Steyn from the other end. They required 12 runs to win the game in the last 12 balls as Steyn hit the winning four on the second ball of the last over and took the score to 115. Amit Mishra took no chances and occupied his crease for 16 off 14 with 2 fours whereas Dale Steyn secured his end with 9 from 5 balls.

Morne Morkel and Shahbaz Nadeem were the leading bowlers with two wickets each whereas Irfan Pathan and Johan Botha shared one wicket each.

Sunrisers Hyderabad clinched the match by a margin of three wickets which was their third win in the four games played so far and took their points tally to 6.