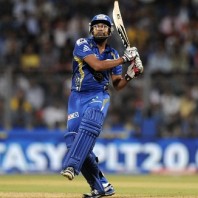 Rohit Sharma led Mumbai Indians from the front by his splendid knock and the bowlers defended their reasonable score as the home team trounced Kings XI Punjab.

Mumbai Indians blasted 174 runs for the loss of just three wickets in their allotted quota of 20 overs and Kings XI Punjab fought well by scoring 170 with one wicket remaining.

Rohit Sharma (Mumbai Indians) was declared ‘Player of the match’ for his majestic unbeaten innings of 79 from 39 balls.

The 41st match of the Indian Premier League was played on Monday, April 29, 2013, at Wankhede Stadium, Mumbai.

Earlier, Rohit Sharma, the captain of Mumbai Indians, won the toss and sent in Dwayne Smith along with Sachin Tendulkar to start the proceedings. Tendulkar hit 2 fours in the first over but lost his wicket for 9 in the next over and was replaced by Dinseh Karthik. The latter added 10 runs in the fifth over with 1 six and 1 four but was clean bowled by Manpreet Gony for 25 as Sharma walked in the center. Smith got his first boundary on the 21st ball he faced and was dropped by Manan Vohra at deep midwicket off Piyush Chawla at 13 in the 10th over. Dwayne Smith opened up by dispatching 1 six and 2 fours in the next three overs but became the third victim at 86 in 12.2 overs for 33. 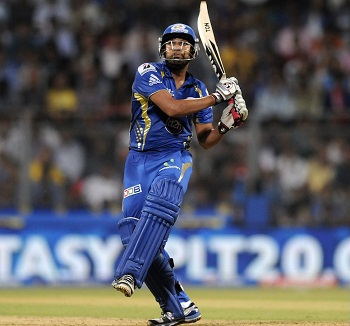 Kieron Pollard got together with Rohit Sharma and the first hit a six to start his innings and the hundred of the innings was displayed on board in the 15th over. Rohit Sharma took the game in his hands before it was too late and added 23 runs in the next two overs with 2 sixes and even fours. He raced to his fifty with another six and the score was taken to 147 after 19 overs. David Hussey came in to bowl the last over and he was given a harsh treatment by Sharma who dispatched 3 mighty sixes and 2 fours. Rohit Sharma remained unbeaten for 79 off 39 mere deliveries comprising 6 giant sixes and even fours, Kieron Pollard was at the other end with 20 as Mumbai Indians marshalled to 174 with seven wickets in hand in 20 overs.

Praveen Kumar, Manpreet Gony and Piyush Chawla were the only successful bowlers with one wicket each.

Kings XI Punjab lost an early wicket at 12 when Mandeep Singh was gone for 9 and the next batsman, Manan Vohra, was caught by Pollard off Mitchell Johnson for one. David Hussey got together with Shaun Marsh and they scored 21 runs in two overs with 4 fours. Hussey accumulated 16 runs in the sixth over with 2 consecutive fours and 1 six as Marsh surrendered for 10 as the total touched 55 in 6.1 overs. David Miller was the newcomer who got a four on the very first ball he faced and enhanced the score to 76 with David Hussey. The latter was the fourth batsman who went back to his shell for 34 off 18 with 1 six and 5 fours.

Kings XI Punjab was struggling at 5-79 in 9.3 overs but it was David Miller who faced the rival bowlers bravely as the wickets kept on crumbling at the other end. He sent the ball flying over the rope twice in the 13th over and completed his half century on the last ball of the 17th over with another six. David Miller was the 9th batsman who went back to the dressing room for 56 off 34 with 5 grand sixes and 1 four. Praveen Kumar almost took his side to the victory by smashing 24 runs from the 15 balls with 2 big sixes and 1 four but was caught by Tendulkar off Dhawal Kulkarni on the last ball of the innings.

Mumbai Indians won the interesting game with a narrow margin of just four runs and have climbed to 12 points.