Rajasthan Royals scored 165 runs with four wickets in hand at the end of the scheduled 20th over and Mumbai Indians hammered 169 for the loss of six wickets in 19.5 overs.

Harbhajan Singh (Mumbai Indians) was declared ‘Player of the match’ for his deadly bowling in the game.

Rahul Dravid won the toss for Rajasthan Royals and walked in to bat with Ajinkya Rahane. They got off to a reasonable beginning by scoring 33 runs in the first five overs complimented with 3 fours from each batsman. Dravid added 2 fours in the next over as Ajinkya Rahane was clean bowled by Harbhajan Singh at 44 in 6.3 overs for 21. Shane Watson came in next as Dravid got another 2 fours in the following overs and the score was taken to 60 after 8.4 overs. Harbhajan Singh struck again by removing Watson for just six runs and Sanju Samson was unable to open his account.

Stuart Binny and Dravid tried to consolidate the innings and kept on creeping with some boundaries. Binny hit the first six of the innings in the 12th over followed by a four on the last ball. Rahul Dravid became the third victim of Harbhajan Singh for 43 off 37 deliveries with 7 fours. Kieron Pollard got rid of Stuart Binny and Kevon Cooper in the 16th over for 27 and 4 runs as they reached 6-108 in 15.3 overs. Brad Hodge and Dishant Yagnik shared an unbroken attacking partnership for the seventh wicket by smashing 57 runs in 27 balls and enhanced the score to 6-165 in 20 overs. Yagnik was at the crease for 31 off 17 with 5 fours and Hodge was at the other end for 19.

Harbhajan Singh was the chief wicket taker with three, Kieron Pollard held two whereas Lasith Malinga got one.

Dwayne Smith and Aditya Tare took off adventurously by scoring 32 runs in the first four overs with 1 six and 4 fours. The duo gathered 9 runs in the sixth over and Smith added 2 fours in the 8th one. The openers contributed 70 runs in 9.1 overs as Aditya Tare was caught by Sanju Samson at long-on at the bowling of Kevon Cooper for 35 off 27 with 2 lofty sixes and 3 fours. Dinesh Karthik joined in with Smith and they accumulated 16 runs in the 12th over with 3 fours. Dwayne Smith dispatched his fifty with a grand six over mid wicket in the following over and they were rushing towards the target.

The score was taken to 125 after 14.1 overs when Dinesh Karthik was caught by Rahane off Cooper for 22 and the skipper of Mumbai Indians, Rohit Sharma went out cheaply for just two runs. The match became interesting when Dwayne Smith was caught  by Samson off Stuart Binny for 62 off 44 balls with 2 big sixes and 6 fours. Mumbai Indians lost their fifth wicket at 141 when Kieron Pollard was gone for 11 and they required 23 runs to win from 12 deliveries. Ambati Rayudu and Harbhajan Singh were at the crease as the first hit 13 runs in the 19th over with 1 six and 1 four but his stumps were broken by Shane Watson for 17 on the second ball of the final over. Harbhajan Singh hit a winning four and won the game for his team as Mumbai Indians thrashed 6-169 with one ball to spare.

Kevon Cooper was the top wicket taker with two whereas James Faulkner, Shane Watson, Siddharth Trivedi and Stuart Binny claimed one wicket each.

Mumbai Indians grabbed the thrilling encounter with a margin of four wickets and have reached the final of the Indian Premier League 2013. They will play against Chennai Super Kings on Sunday, May 26, 2013, at the same venue. 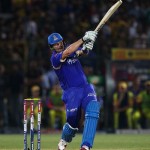 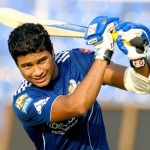