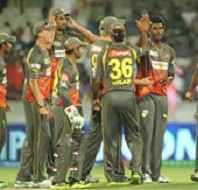 The jubilant new team in the IPL 2013, Sunrisers Hyderabad, registered their first win in their inaugural game against Pune Warriors with a dedicated team work.

The Sunrisers scored 126 runs with four wickets remaining in the allocated 20 overs and Pune Warriors were bowled out for 104 runs in 18.5 overs.

Amit Mishra (Sunrisers Hyderabad) was declared ‘Player of the match’ for his excellent bowling in the game.

The 3rd match of the Indian Premier League 2013 was played on Friday, April 5, 2013, at Rajiv Gandhi International Stadium, Uppal, Hyderabad.

Earlier, the skipper of Pune Warriors, Angelo Mathews, won the toss and put Sunrisers Hyderabad in to bat first. Akshath Reddy and Parthiv Patel opened the innings with caution and scored 21 runs in the first four overs. Patel hit a couple of fours in the next over but was clean bowled by Ashok Dinda for 19. The wicket fell at 34 in 5.2 overs as Kumar Sangakkara took guards in the middle and added 2 fours in the following overs. The pair took the score to 60 in 9.5 overs when Sangakkara was gone for 15 and the stumps of Reddy were shattered by Yuvraj Singh for 27 after the addition of 12 runs to the total. 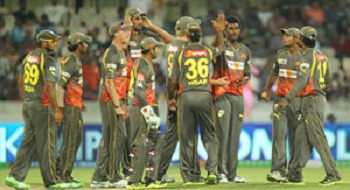 Thisara Perera played an attacking innings and hit two consecutive fours in the 14th over with a little contribution from the other end. He added another 15 runs three overs later with 1 six and 1 four and was finally caught at long-on by Manish Panday off Dinda for 30 from 18 balls with 1 six and 3 fours. The Sunrisers Hyserabad reached 126 runs for the loss of six wickets at the end of the 20th over.

Ashok Dinda was the top wicket taker with two whereas Marlon Samuels, Bhuvneshwar Kumar, Rahul Sharma and Yuvraj Singh shared one wicket each.

Pune Warriors and Manish Panday started off slowly as Robin Uthappa came into bat along with Manish Pandey and they scored just 18 runs from the first five overs. Uthappa hit the first six of the innings in the next over and got another 2 fours in the seventh over but was caught behind by Parthiv Patel off Thisara Perera for 24 from 22 deliveries. Marlon Samuels became the next victim at 42 in 8.3 overs for just two runs and Yuvraj Singh multiplied the miseries of their team when he surrendered against Amit Mishra for 2 mere runs.

The fifth wicket was lost at 50 after Pandey walked back to the pavilion for 15 as Ross Taylor and Abhishek Nayar tried to consolidate the innings. The duo found hard to score the runs at will and the boundaries became difficult to score and they crawled to 83 in 15.5 overs. Both batsmen departed one after another after contributing 19 runs each as the entire team was sent back to the dressing room for 104 with seven balls to spare.

Dale Steyn and Amit Mishra were the most deadly bowlers and grabbed three wickets each, Thisara Perera held two whereas Ashish Reddy claimed one wicket.

Sunrisers Hyderabad clichéd the game convincingly with a margin of 22 runs and ended up by gathering two valuable points.