The debutants in IPL 2013, Sunrisers Hyderabad, won an important game vs. Kolkata Knight Riders, got into the playoffs and eliminated Royal Challengers Bangalore.

Kolkata Knight Riders scored 130 for the loss of seven wickets in the stipulated 20 overs and Sunrisers Hyderabad powered 132 with five wickets intact and seven balls remaining.

Parthiv Patel (Sunrisers Hyderabad) was announced ‘Player of the match’ for his brave knock of 47 while opening the innings.

The 72nd match of the Indian Premier League was played on Sunday, May 19, 2013, at Rajiv Gandhi International Stadium, Uppal, Hyderabad.

Earlier, Gautam Gambhir, the skipper of KKR, won the toss and opted for batting first. He came in along with Manvinder Bisla who hit 3 fours in the first five overs but lost his wicket for 15 and was replaced by Jacques Kallis. Gambhir was dropped at 1 on the fifth ball of the next over as Kallis hit 2 successive fours in the seventh one. Gambhir was run out at 42 after scoring 10 runs and Eoin Morgan was declared leg before wicket off Karan Sharma for 9.

Yusuf Pathan and Kallis tried to put a few important runs on board and the first hit 3 fours in the following overs. They took the score to 89 in 15.1 overs as Kallis was caught by Shikhar Dhawan off Dale Steyn for 24. The incoming batsmen were unable to perform well and it was left to Pathan who swung his bat thrice while sending the ball flying over the fence. Yusuf Pathan remained unbeaten for 49 off just 29 balls with 3 spicy sixes and even fours as Kolkata Knight Riders reached 130 with three wickets in hand in 20 overs.

Dale Steyn was the top wicket taker with three whereas Anand Rajan, Thisara Perera, Amit Mishra and Karan Sharma claimed one wicket each.

Parthiv Patel and Shikhar Dhawan got off to a reasonable chase as the first dispatched 4 fours in the initial five overs. Patel hit 2 consecutive fours in the next over and Dhawan got 1 six in the same over. The latter added another six and 3 fours in the coming overs and the pair gave a solid opening stand of 89 runs in 11.3 overs. Shikhar Dhwan was held lbw off Iqbal Abdulla for 42 off 35 with 2 lofty sixes and 3 fours and Parthiv Patel followed his partner in an identical manner 11 runs later after smashing 47 from 37 deliveries comprising 7 fours.

Kolkata Knight Riders came back in the game by grabbing three quick wickets and the hosts were reeling at 5-112 in 17.5 overs. Darren Sammy and Biplab Samantray joined together and kept the chase on as the latter hit a four on the last ball of the 18th over. The target was reduced to 15 from 12 deliveries as Sammy lashed 2 back to back sixes in the next over off Iqbal Abdulla and won the match for his side. Darren Sammy and Biplab Samantray occupied their end for 17 and 5 runs respectively as Sunrisers Hyderabad thrashed 5-132 after 18.5 overs.

Iqbal Abdulla was the top wicket taker with three and Shami Ahmed ended up with one wicket.

Sunrisers Hyderabad clinchéd the important game of the tournament by a huge margin of five wickets and secured their place in the top four while overtaking Royal Challengers Bangalore who have 18 points from 16 matches. 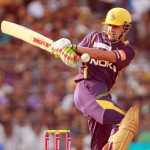 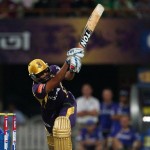 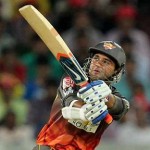