The game was restricted to 8 overs per side due to rain interruption and Royal Challengers Bangalore plundered 106 for the loss of just two wickets and Chennai Super Kings scored 6-82.

Virat Kohli (Royal Challengers Bangalore) was announced ‘Player of the match’ for his brisk knock of 56 off 29 mere balls.

The 70th game of the Indian Premier League was held on Saturday, May 18, 2013, at M Chinnaswammy Stadium, Bangalore.

MS Dhoni won the toss for Chennai Super Kings and invited the hosts to bat first on a rain hit park. The skipper of RCB, Virat Kohli came into bat along with Chris Gayle and the first started off with a four. Gayle took off with a six in the second over and Kohli added 15 runs with 1 six and 2 fours in the next one. Kohli continued with his blast by gathering 12 runs in the fourth over with 1 six and 1 four whereas Gayle dispatched 3 back to back sixes in the fifth.

Virat Kohli was dropped at 34 on the first ball of the sixth over and Gayle was caught by Michael Hussey at extra cover off Dwayne Bravo for 28 off 13 with 4 mighty sixes. AB de Villiers managed just five runs as the next batsman Moises Henriques hit three consecutive fours in the seventh over. Virat Kohli blasted his fifty in the final over comprising 2 sixes and 1 four and remained unbeaten for 56 off 29 with 4 lofty sixes and 6 fours. Henriques held his end for 12 as Royal Challengers Bangalore thrashed 106 with 8 wickets in hand at the end of the 8th over.

Chennai Super Kings had an awkward beginning by losing their two top order batsmen in the second over of Zaheer Khan. Dwayne Bravo associated with Murali Vijay who hit his first four in the third over. Bravo got one six in the next over but was caught by Manoj Tiwary off Vinay Kumar for 11 as Dhoni walked in the center. The batsmen accumulated 19 runs in the sixth over with a couple of sixes and one four as the visitors required another 52 runs to win from 18 deliveries.

Murali Vijay was finally gone for 32 off 19 balls with 2 lofty sixes and even fours as MS Dhoni hit another 2 sixes and 1 four before he was removed for 24 off 10 with 2 sixes and 2 fours. Ravindra Jadeja was caught and bowled by Zaheer Khan for seven as Chennai Super Kings were restricted to 82 for the loss of six wickets in the required quota of overs.

Zaheer Khan was the star performer with four wickets whereas Ravi Rampaul and Vinay Kumar held one wicket each.

Royal Challengers Bangalore won the important game by a good margin of 24 runs and they were benefitted by two points. 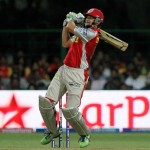