A magnificent hundred by Ajinkya Rahane put India in command against the powerful unit of New Zealand who are facing a possible defeat in the final Test.

The Black caps scored 192 in their first innings followed by 24 for the loss of one wicket in the second whereas the visitors piled up 438 in their first one.

Earlier, India started the day at 2-100 after 28 overs with Shikhar Dhawan along with Ishant Sharma at 71 and 3 runs. They took the score to 141 when the latter was gone for 26 and was replaced by Virat Kohli. Dhawan kept on cruising but was unluckily dismissed for 98 and Rohit Sharma followed him for a duck at 165. Ajinkya Rahane walked in next and started stabilising the innings with his partner as the score went past the two hundred mark in the 58th over. The sixth wicket association was broken at 228 when Kohli went back to the pavilion for 38.

MS Dhoni was the incoming batsman who decided to attack and Rahane reached his fifty in the process. The Indian skipper rushed to his half century in the coming overs and the boundaries were flowing from the willows of the duo regularly. The 120 runs seventh wicket partnership was dislodged at 348 when Dhoni became the next victim for 68. Ajinkya Rahane kept on cruising with breezy assistance from the late order batsmen and blasted his sixth Test ton with a four. He finally surrendered his wicket for 118 as the visitors hammered 438 in their first innings.

Trent Boult, Tim Southee and Neil Wagner shared three wickets each whereas Jimmy Neesham got one.

The Kiwis went into their second innings with a deficit of 246 runs and lost their first wicket at just one. Hamish Rutherford and Kane Williamson saw off the day with 18 and 4 while taking their side to 24 in 9 overs.

India still enjoys a big first innings lead of 222 runs and the remaining batsmen of New Zealand should play miraculous innings to save the game. 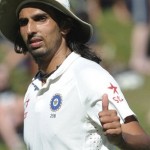