Brendon McCullum led his side from the front with a double hundred and the pace battery of the Kiwis dismantled the top order batting of India.

The Black Caps hammered 503 in their first innings whereas the visitors managed 130 for the loss of four wickets after 39 overs in the first one.

Earlier, the hosts started the day at 4-329 in 90 overs whereas Brendon McCullum and Corey Anderson were batting at 143 and 42. The duo got off smartly with regular boundaries and the latter reached his fifty with a four. Anderson speeded up the run rate but was declared leg before wicket off Ishant Sharma for 77 as the score touched 384. McCullum kept on cruising at his end and powered his second double century in the longer version of the game on the last ball before lunch interval.

The skipper of New Zealand shared a few small partnerships and became the last victim after piling up 224 runs off 307 deliveries with 5 towering sixes and 29 fours. The innings of the entire home side was folded back for 503 after 121.4 overs.

Ishant Sharma was the highest wicket taker with six, Zaheer Khan held two whereas Mohammed Shami and Ravindra Jadeja shared one wicket each.

The tourists faced thunderbolts from the quickies of the Black Caps who clinched three wickets at 10 mere runs. Shikhar Dhawan, Cheteshwar Pujara and Virat Kohli were sent back to the pavilion for 0, 1 and 4 runs. Rohit Sharma joined in with Murali Vijay and they crept to 51 when the latter was clean bowled by Neil Wagner for 26. Ajinkya Rahane walked in next and survived a huge lbw shout at two whereas his partner was hitting the cherry nicely. Sharma attained his Test half century in the process and remained unbeaten for 67. Rahane secured his end for 23 as the visitors reached 4-130 when the last ball of the day was bowled.

Trent Boult was the main wicket taker with two whereas Tim Southee and Neil Wagner chipped in with one each.

New Zealand still has a mammoth first innings lead of 373 runs and India looks like being in all sorts of trouble at the moment. 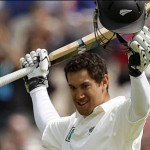