Adam Voges hammered his maiden ODI ton as Australia piled up a substantial score on board and their bowlers defended well while West Indies lost the 5th match.

Australia smashed 274 runs with five wickets in hand after the completion of the scheduled 50 overs and West Indies were bowled out for 257 runs in 49.5 overs.

Adam Voges (Australia) was declared ‘Player of the match’ for his brilliant unbeaten knock of 112 off 106 balls.

Mitchell Starc (Australia) was declared ‘Player of the series’ for his outstanding bowling in the series. He was the highest wicket taker from either sides after clinching 11 wickets at an awesome average of 9.27 runs per wicket with the best of 5-20.

The fifth and final One Day International of the series was played on Sunday, February 10, 2013, at Melbourne Cricket Ground.

Darren Sammy, the captain of West Indies won the toss and put Australia in to bat. The decision paid dividends when the visitors got rid of both Kangaroo openers for two mere runs in 2.4 overs. Tino Best struck twice while sending Shane Watson for a duck and Aron Finch at just one run. Phillip Hughes and Shaun Marsh got together, started building the innings and took the score to 23 after 10 overs. They added 61 runs for the third wicket in 16 overs when Hughes was gone for 29 runs and his place was taken by Adam Voges.

Voges was dropped at seven runs by Sammy in the slip off Sunil Narine on the second ball of the 22nd over as Marsh lost his wicket for 40 as the score touched 82 in 24.1 overs. Brad Haddin came in next with Voges and the first hundred of the innings was achieved in the 29th over. Haddin hit a couple of fours in the next over and Adam Voges followed him with 2 boundaries in the 37th over and reached his fifty as well. The latter started picking up the boundaries at regular intervals and the duo went past the hundred runs partnership in the 41st over.

Brad Haddin was caught by Kieran Powell off Kemar Roach for 43 from 45 deliveries with 5 fours at 193 in 41.3 overs. James Faulkner associated with Voges and they were scoring the boundaries continuously. Adam Voges blasted his maiden ODI hundred in the 48th over and secured his end with 112 off 106 with 2 smart sixes and 10 fours.  Faulkner was at the other end for 31 as the hosts powered 274 runs for the loss of five wickets in 50 overs.

Tino Best and Dwayne Bravo were the top wicket takers with two wickets each and Kemar Roach held one.

The Windies lost their first wicket at seven runs as Darren Bravo joined in with Johnson Charles. The pair kept the chase on by reaching 41 in the first 10 overs and kept on cruising nicely. Charles got his half century in the 20th over and hit the first six of the innings two overs later. The second wicket partnership took the score to 113 in 22.4 overs when Darren Bravo became the second victim for 33. The next wicket went down 16 runs later as Kieron Pollard walked in the center and Charles maintained his rythm at the other end.

Johnson Charles attained his maiden ODI century with a four on the fourth ball of the 37th over but surrendered on the very next ball for exact 100 off 121 balls with 1 six and 8 fours. The Aussies bowlers took over from there as the wickets kept on crumbling. Pollard was the seventh batsman who went back to the pavilion for 45 off 62 with 1 six and 2 fours. Darren Sammy was the only other notable batsman who scored 23 runs as the innings of the Caribbeans was folded back for 257 with one ball to spare.

Clint McKay and Mitchell Johnson were the supreme bowlers with three wickets each whereas Ben Cutting, James Faulkner and Xavier Doherty shared one wicket each.

Australia won the final One Day International by a margin of 17 runs and swept the five match series 5-0. 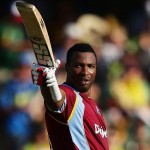 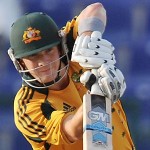 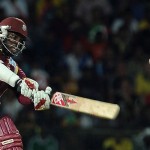