Elias Sunny broke the back of the Irish batting in the first T20 as Bangladesh won the inaugural match at Belfast, with a hefty margin of 71 runs.

Elias Sunny (Bangladesh) was declared ‘Player of the match’ for his deadly bowling spell of 5-13 in 4 overs.

The first Twenty20 of the three match series was played on Wednesday, July 18, 2012, at Civil Service Cricket Club, Stormont, Belfast.

Earlier, William Porterfield, the captain of Ireland, won the toss and opted to field first. Tamim Iqbal and Mohammad Aashraful opened the innings for Bangladesh in a particular T20 mode while gathering 11 runs in the third over with a four. They took the score to 35 in five overs when Ashraful was clean bowled by Max Sorensen for 15 as their prominent all-rounder, Shakib Al Hasan, joined in with Tamim.

The duo kept the momentum of scoring while getting boundaries almost in every over and the first fifty of the innings appeared on board in the seventh over. Shakib Al Hasan punished John Mooney for 13 runs in the 9th over with three well timed fours and carried on with another two in the 11th over. The second wicket partnership contributed 59 runs in 5.2 overs when Tamim Iqbal lost his wicket for 31 off even deliveries with 3 fours.

Shakib Al Hasan completed his fifty on the second ball of the 13th over with a couple but his stumps were uprooted by Paul Stirling on the first ball of the following over for 57 off just 33 balls with 9 fours. The fourth wicket was gone at 120 in 14.5 overs as Mahmudullah and the debutant Ziaur Rahman got together at the crease.

Ziaur Rahman opened up with two consecutive sixes in the 16th over and dispatched other two in the next over. He changed the complexion of the game by hitting sixes and remained unbeaten for 40 off 17 mere deliveries with five grand sixes. Bangladesh hammered 190 runs with five wickets still in hand at the end of the 20th over.

Max Sorensen and Paul Stirling were the most successful bowlers with two wickets each as Boyd Rankin held one.

Ireland started off well as William Porterfield got 8 runs in the first over with a six. He was severe in the second over off Abul Hasan and gathered 15 runs with a couple of fours and one six. His partner, Paul Stirling opened his account on the second ball of the 3rd over with two runs and they reached 30 at the end of the fifth over.

Porterfield was stumped smartly by the wicketkeeper Mushfiqur Rahim off Abdur Razzak for 26 off 16 balls with two sixes and even fours. The first wicket fell at 32 in 3.4 overs and that was the start of disaster for the home side as Bangladesh bowlers took over the game and especially Elias Sunny was unplayable.

The fourth wicket fell at 56 in 8.3 overs as Gary Wilson appeared in the centre and secured one end whereas the wickets kept on sliding from the other. He was unable to get a solid stand from the other end until Max Sorensen joined him after the 8th wicket went down at 72 in 14.3 overs. Wilson was at the crease for unbeaten 41 off 36 balls with 1 six and 4 fours, Sorensen was at the other end for 12 as Ireland managed 119 runs after utilising the full quota of 20 overs.

Bangladesh won the first T20 with a huge margin of 71 runs and is leading the three match series 1-0. The second match will be played at the same venue on July 20, 2012. 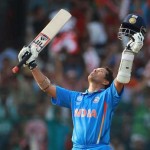