A combined team effort well led by the opener, Tamim Iqbal, followed by an excellent bowling guided Bangladesh to a smooth win against New Zealand.

The Bengal Tigers smashed 247 runs in 49 overs and the Black Caps were bowled out for 207 with 20 balls still remaining.

Sohag Gazi (Bangladesh) was declared ‘Player of the match’ for his lethal off spin bowling.

The second One Day International of the three match series was played on Thursday, October 31, 2013, at Shere Bangla National Stadium, Mirpur.

Earlier, Mushfiqur Rahim won the toss, elected to bat and Tamim Iqbal along with Shamsur Rahman gave them a nice beginning. They gathered 63 runs in 16.5 overs when the latter was gone for 25. Mominul Haque came in next and scored 31 runs whereas Mushfiqur Rahim carried on with the business. Tamim Iqbal attained his 25th ODI fifty but lost his wicket for 58 and his skipper was dismissed for 31. Mahmudullah and Sohag Gazi contributed 21 and 26 as the innings of the hosts was rolled back for 247 with six balls to spare.

James Neesham and Corey Anderson were the top wicket takers with four each whereas Kyle Mills and Nathan McCullum held one wicket each.

The Kiwis surrendered their three supreme batsmen for 45 as Ross Taylor and Corey Anderson started the repair work. They kept on crawling with odd boundaries and took the score to 106 when Anderson became the fourth victim for 37. The home bowlers became unplayable and the wickets were falling without much resistance. Taylor was the 8th batsman who returned to the dressing room for 45 whereas Nathan McCullum and Kyle Mills scored 25 and 27 runs down the order while New Zealand was finally bowled out for 207 in 46.4 overs.

Mashrafe Mortaza and Sohag Gazi were the main wicket takers with three each, Mominul Haque claimed two whereas Abdur Razzak got one wicket.

Bangladesh triumphed in the second ODI against New Zealand by 40 runs and leads the three match series 2-0. 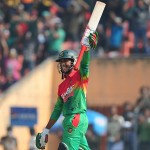 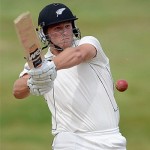