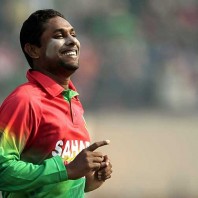 The full bloodied West Indies were unable to cope with the dangerous spin bowling of Bangladesh as the hosts won the 1st One Day International comprehensively.

The entire Caribbeans team was sent back to the dressing room for 199 runs with 19 balls to spare. Bangladesh thrashed 201 runs for the loss of just three wickets in 40.2 overs. 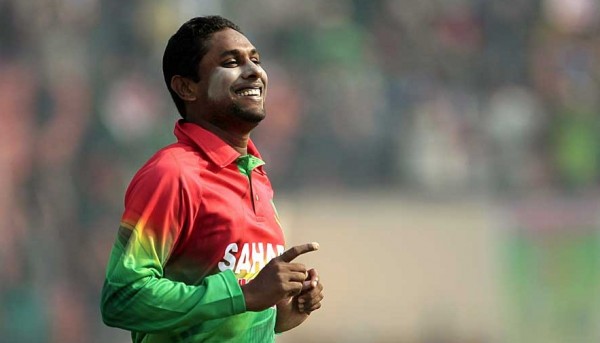 Sohag Gazi (Bangladesh) was declared ‘Player of the match’ on his debut as he grabbed four wickets for 29 mere runs in 9.5 overs.

The first One Day International of the five match series was played on Friday, November 30, 2012, at Sheikh Abu Nasir Stadium, Khulna.

Earlier, Darren Sammy won the toss for the Windies, preferred to bat first and sent in Lendl Simmons along with Chris Gayle to open the innings. The beginnings was slow for the visitors as they scored just three runs off the initial three overs as Gayle opened up with 14 runs in the next over with 1 six and 2 fours. Simmons got a couple of fours in the progress as he was dropped on the first ball of the 10th over and once again Gayle added 14 runs in the same over with 1 six and 2 fours. Lendle Simmons was declared leg before wicket off Mashrafe Mortaza for 13 as the score touched 48 runs.

Chris Gayle was gone at the same score for 35 off 40 balls and Marlon Samuels was unable to score any run. Darren Bravo and Kieron Pollard got together and tried to hold the innings together as the score board kept on moving. Darren Bravo came into his own and gathered 16 runs in the 22nd over with 1 six and 2 fours and the pair took the score to 100 in the next over. Kieron Pollard was caught by Mashrafe Mortaza at midwicket off Abdur Razzak for 15. Darren Bravo went back to the dressing room next two runs later for 35 as the wickets started falling at regular intervals.

West Indies were reeling at 8-133 when Sunil Narine and Ravi Rampaul held their innings together for a while. The duo shared a valuable partnership of 57 runs in 10.4 overs before they lost their wickets at 36 and 25 runs respectively. The Windies were bowled out for 199 runs in 46.5 overs with a superb bowling from the Bengal Tigers bowlers.

Sohag Gazi impressed on his debut ODI by clinching four wickets, Abdur Razzak got three whereas Mashrafe Mortaza and Mahmudullah claimed one wicket each.

Tamim Iqbal gave a rising start to the home side and scored 25 runs in the first six overs with 1 six and 4 fours as the other opener, Anamul Haque managed just one runs after facing 11 balls. The latter hit 3 fours in the coming overs as Tamim Iqbal smashed his 24th ODI half century by hitting 16 runs in the 13th over with 1 six and 2 fours. The openers provided a stable stand of 88 runs in 15.1 overs as Tamim Iqbal was caught by Pollard at backward point off Sunil Narine for 58 from 51 balls with 2 sixes and 8 fours.

Naeem Islam joined in next with Amanul Haque who started playing his shots but was caught and bowled by Darren Sammy for 41 off 62 deliveries with 7 fours. The second wicket fell at 112 in 22.4 overs when the youngster Nasir Hossain walked in the centre and sent the ball out of the fence twice in the next over. The pace of scoring was maintained by the two batsmen at the crease the boundaries were witnessed frequently. The third wicket association enhanced the score to 157 off 31.3 overs as Nasir Hossain was caught at point by Kieron Pollard on the bowling of Andre Russell for 28.

The Bangladesh skipper, Mushfiqur Rahim dropped in next and maintained the rhythm of scoring with Naeem Islam who completed his third ODI fifty on the first ball of the 41st over. Mushfiqur Rahim hit the winning four on the next ball as Bangladesh achieved the target by hammering 201 runs with 9.4 overs to spare.

Bangladesh won the first ODI majestically by a huge margin of seven wickets and leads the five match series 1-0.