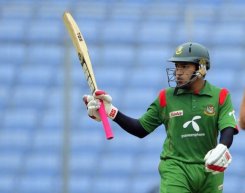 Bangladesh will give tough time to Pakistan – Mushfiqur Rahim

Mushfiqur Rahim, Bangladesh’s captain, predicted that the current Bangladesh squad has the talent to beat any good team of the world and they have few match winners who can get them result with their individual performance on their day. He commented,

“Bangladesh were never at their best collectively against Pakistan in the past. They have five to six match-winners so it is hard to beat a side that strong even if you give your 100%. But they are human and they could make mistakes and let us into games.”

The 23-year-old Captain was speaking ahead of the first Twenty20 game against the visitors and anticipated his team will surprise Pakistan in the opener.

The visitors started off their tour with the only T20, match which was played on October 11, 2011, at Shere Bangla Stadium, Mirpur, under the Captaincy of Mushfiqur Rahim.

The Carribeans scored 132 runs for the loss of eight wickets in the allotted 20 overs and set a difficult target for the home side.

Bengal Tigers were in trouble after they had lost four top order batsmen for 52 runs in 9.5 overs when Mushfiqur Rahim stepped in to bat.

He steadied the innings with three reasonable partnerships and led the team from the front with his individual performance.

The wicket keeper batsman played a match winning innings of unbeaten 41 runs off just 26 balls with the help of two sixes and a four.

Bangladeshachieved the target in 19.5 overs by scoring 135 runs and won the thriller by three wickets.

Pakistanhas landed inBangladeshalready after their recent triumph against the formidable Sri Lankan team who were beaten in all three types of cricket under the Captaincy of cool headed Misbah-Ul-Haq.

They won the three Test series 1-0, five ODI series comprehensively by 4-1 and won the only T20 match as well.

The visitors are in great form and have the killing instinct with their formidable bowling attack and they look forward to continue with the winning spree.

Mushfiqur Rahim was fully aware of the capabilities of thePakistanand especially their lethal bowling attack.

He stressed that his team should utilize the home conditions and pitches in a professional manner which will be a step towards victory. He narrated,

“They [Pakistan] have one of the best bowling attacks in ODIs, so playing against them would be difficult. In our last series, we couldn’t utilise the wickets. It would be necessary for us to take responsibility in this series. The team that’ll take most out of the pitches, they’ll get the desired results.”

Pakistan will play one T20, three ODIs and two Tests in their ongoing tour of Bangladesh.

Both teams will face each other in the only T20, which will be played on November 29, 2011, at Shere Bangla National Stadium, Mirpur and Mushfiqur Rahim is anticipating a victory.