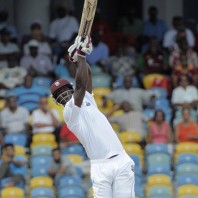 Darren Sammy led from the front with an attacking knock while contributing 106 runs partnership with Denesh Ramdin and put the Windies in command vs. Zimbabwe.

Zimbabwe was bowled out for 211 runs in the first innings followed by 41 after losing three top wickets in the second whereas the Caribbeans smashed 307 runs in their first innings.

Earlier, West Indies resumed their innings at 18 for the loss of two wickets in 11 overs whereas Chris Gayle and Darren Bravo were unbeaten on 11 and 0 runs respectively. Bravo hit a couple of fours before he was caught behind by the wicketkeeper Regis Chakabava off Kyle Jarvis for 11 at 43 in 18.3 overs. Marlon Samuels got in next and initiated his innings with a four as Gayle added 2 boundaries in the 21st over. The runs rate was speeded up by the two batsmen and the ball was going out of the rope frequently. The score was enhanced to 81 in 26.1 overs when Chris Gayle was caught at the second slip by Brendan Taylor off Tendai Chatara for 40 from 76 balls with 8 fours.

The most experienced batsman of the Windies, Shivnarine Chanderpaul, joined in next with Samuels who preferred to carry on with his attacking batting. The latter hit 1 six and 3 more fours in the next three overs and the score went past the hundred runs mark in the 30th over. The fifty run stand was witnessed on the second delivery of the 38th over as Marlon Samuels achieved his 18th Test half century on the next ball. He lost his wicket at 144 after contributing 51 off 74 with 1 six and 9 fours and Chanderpaul followed him seven runs later for 26.

The Caribbeans were in trouble at 6-151 and the rival bowlers looked like taking the game away from the hosts as Denesh Ramdin and the skipper, Darren Sammy, got together in the center. The duo started punishing the bowlers and was dispatching the ball out of the boundary line at will. The second hundred of the innings appeared on board in the 55th over with 2 grand sixes from Sammy as Ramdin kept on ticking the board at his end. 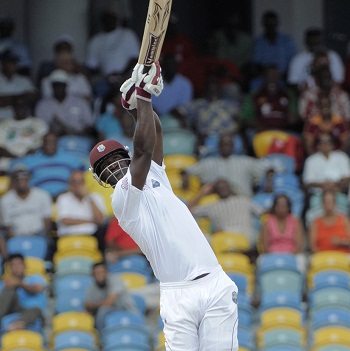 Darren Sammy reached his fourth Test half century during the 59th over while hitting one six as well. He carried on with his onslaught by adding 14 runs in the 63rd over with 1 six and 2 fours and was dropped twice on consecutive deliveries of the 67th over. Sammy was finally clean bowled by Hamilton Masakadza for 73 off just 69 balls with 4 towering sixes and 8 fours. The seventh wicket contributed a valuable 106 runs as Denesh Ramdin got his 9th Test fifty with a four in the 76th over. He became the ninth victim at 301 after scoring 62 off 130 with 8 fours and Tino Best scored 24 runs down the order. West Indies was dismissed for 307 runs in 84.2 overs after gaining a first innings lead of 96 runs.

Kyle Jarvis was the highest wicket taker with five, Tendai Chatara and Hamilton Masakadza shared two wickets each whereas Ray Price got one wicket.

Zimbabwe got into their second innings with Tino Mawoyo and Vusi Sibanda in a careful manner after conceding a handful lead. Mawoyo tried to carry on with the business by hitting 2 fours in the first six overs but was caught by Sammy off Shannon Gabriel on the first ball of the next over for 9 runs. The first wicket fell at 25 as Hamilton Masakadza was caught by Darren Sammy again at the bowling of Shane Shillingford for just one runs. The miseries were multiplied for the visitors when Vusi Sibanda was caught and bowled by Shillingford for 15 runs. Zimbabwe managed 41 runs in 14 overs for the loss of three wickets.

Zimbabwe is still 55 runs behind the first innings lead of West Indies with seven wickets remaining. The hosts are in the driving seat at the moment and the match may come to an end on the third day of the match.