The under pressure newly appointed coach of Sri Lankan squad, Geoff Marsh was hopeful that his team will come up with better show in the forthcoming series against South Africa. 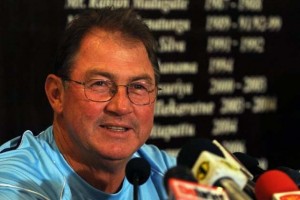 The Lankan Lions looks like a depleted side after their recent debacle against Pakistan in U.A.E. They played three Test series, the first match played at Sheikh Zayed Stadium, Abu Dhabi, from October 18 to 22nd ended in a draw.

Pakistan won the second Test comprehensively by nine wickets at Dubai International Cricket Stadium on October 29, 2011, due to poor performance of their batsmen.

The third match was played at Sharjah Cricket Stadium from November 3 to 7, 2011, where their batting line up performed well and put Pakistan under pressure but the hosts managed to draw the match.

The Test series was followed by five One Day Internationals where Sri Lanka was beaten all ends up. Pakistan won the first ODI by eight wickets at Dubai on November 11, 2011, but they bounced back in the second match by winning that by 25 runs at the same venue three days later.

Pakistan did not look back from there and won the remaining matches and clinched the series 4-1. The Green Shirts folded the entire series by winning the only Twenty20 by five wickets.

Sri Lanka had a dreadful summer as they lost to England while they were on away tour. They lost the three Test series 1-0, won the only T20 in a commanding way by nine wickets but lost the five match ODI series 3-2.

Australia visited Sri Lanka in August- September, 2011, where the home team started off well by defeating the visitors 2-0 in two T20s. Australia won the five ODI series 3-2 followed by 1-0 victory in three Test series against them.

Marsh described that he has learnt a lot from the series against Pakistan and anticipated that his team has the potentials to give a better performance against South Africa. He mentioned that a strong team like Australia was bowled out for mere 47 runs by the Proteas in the first Test at Cape Town and lost the match by eight wickets. The Kangaroos did not give up and won the second Test by two wickets on November 21, 2011, at Johannesburg. He said,

“It’s a tough tour but I firmly believe that if we play well, we can do well. The key is scoring enough runs against that good attack. If you take Australia they were bowled out for 47 in the first Test and they got up from the dead and did well. It can be done.”

He has served as national selector before accepting an assignment for coaching Zimbabwe and has taken over the same responsibilities for Sri Lanka.

Marsh has complete faith in his present squad and anticipated a thrilling series against South Africa. He further commented,

“I am hoping that the disappointment of the last few tours as a playing group we will enable to lift ourselves. It’s a challenge. We have got world class players and we need them to click. The younger players will need to play some big knocks against such an attack.”

The first Test of the three match series will be played from December 15, 2011, at Super Sport Park, Centurion.