A late assault by Eoin Morgan supported by calculated bowling form the home side led England to a welcome victory vs. Australia in the opening ODI at Lord’s.

England smashed 272 runs with five wickets in hand while utilizing the measured 50 overs and Australia crept to 257 for the loss of nine wickets at the close of the match.

Eoin Morgan (England) was declared ‘Player of the match’ for his blistering unbeaten knock of 89 from just 63 balls.

The first One Day International of the five match series was played at Lord’s, London, on Saturday, June 29, 2012.

Earlier, the skipper of Australia, Michael Clarke won the toss and offered the batting to England under the cloudy conditions. Alastair Cook and Ian Bell opened the innings in a defensive mood and managed 15 runs in the first six overs when the play was stopped due to rain for about half an hour. The scoring rate was enhanced after the resumption of the game as Bell hit a couple of fours in the 10th over and the first fifty of the innings was attained in the 13th over.

They took the score to 74 in 17 overs when Ian Bell was declared leg before wicket off Brett Lee for 41from 58 balls with 5 fours. Alastair Cook became the next victim after the addition of 15 runs at his personal feat of 40 off 59 deliveries with the assistance of 5 fours and the third wicket was lost at 121 after 28.1 overs.

Jonathan Trott and the young gun Eoin Morgan took charge and started consolidating the innings as 150 runs were posted on board in the 36th over. Morgan was the most aggressive of the two and Trott reached his fifty on the fifth ball of the 39th over with a couple. The fourth wicket partnership produced 68 runs in 12 overs when Trott was clean bowled by Xavier Doherty for 54 runs. Craig Kieswetter joined in with the hard hitting Morgan who achieved his half century on the third ball of the 45th over.

Morgan punished Lee for two consecutive sixes in the 47 over and added 14 runs in the following over with one six and even four. Kieswetter was gone on the last ball of the innings for 25 as Eoin Morgan remained unbeaten for 89 off just 63 balls with 4 huge sixes and 5 fours. England scored a competitive total of 272 runs for the loss of five wickets at the end of the 50th over.

The Australians initiated the innings with Shane Watson and David Warner who were bit cautious in the beginning and found it hard to score the runs freely. They gathered 20 runs in 5.4 overs when Watson was declared caught behind for 12 after it was referred for review by England. George Bailey came in next and the runs started flowing freely as Warner added 13 runs in the 8th over with two fours. The latter was in an attacking mood and posted his fifty in the 18th over as the first supported him well at the other end.

The second wicket partnership contributed 76 runs when Bailey chopped the ball into his stumps after scoring 29. David Warner added the miseries when he went back to the pavilion six runs later at his personal landmark of 56 off 61 balls with 1 six and 6 fours. The English bowlers made life difficult for the Aussie batsmen and they were reeling at 5-147 in 32.5 overs when their skipper, Michael Clarke and Matthew Wade got together at the crease.

They tried to establish the innings initially followed by few boundaries later on as Clarke achieved another half century of his career in the 42nd over with one six and one four. The sixth wicket association accumulated 57 runs and enhanced the score to 204 as Wade was unluckily run out for 27 runs. The hopes of the Kangaroos vanished when Clarke was declared lbw for 61 from 67 deliveries with 1 six and 6 fours.

Brett Lee cut loose in the later part of the innings by scoring unbeaten 29 from 21 balls with 4 fours but the wickets kept on sliding from the other end. Australia could reach 257 runs with one wicket left when the allocated quota of 50 overs came to an end.

England won the match by 15 runs and is leading the five match series 1-0 while the second ODI will be played on July 1, 2012, at Kennington Oval, London. 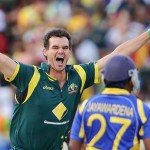