England regained the ICC ODI No.1 ranking just after a gap of only one match and beat the strong rivals South Africa convincingly with  dedicated team work.

The Proteas innings was folded back for 211 runs in 46.4 overs and England smashed 212 runs with four wickets in hand and 12 balls to spare.

Eoin Morgan (England) was declared ‘Player of the match’ for his attacking knock of 73 runs scored off just 67 balls. 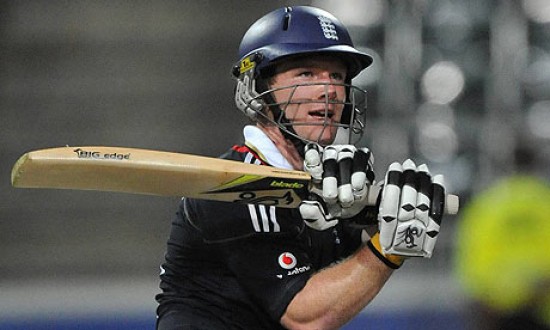 Eoin Morgan – ‘Player of the match’ for his blistering 73 runs

The third One Day International of the five match series was played on Friday, August 31, 2012, at Kennington Oval, London.

Earlier, AB de Villiers, the captain of South Africa, won the toss and preferred to bat first. The innings was initiated by the experienced openers Hashim Amla along with Graeme Smith who had a reasonable start by scoring 18 runs in the first four overs. Amla gathered 11 runs in the next over with a couple of fours and got another two in the 8th over. The fifty runs partnership was attained on the third ball of the 9th over but Smith was clean bowled by James Anderson for 18 runs on the very next ball.

Dean Elgar came in next, joined with Amla and the run rate was controlled by the rival bowlers. The duo crept to 73 in 16.1 overs when the stumps of Hashim Amla were uprooted by Jade Dernbach for 43 off 51 balls with 5 fours. AB de Villiers with Elgar steadied the innings, the runs started coming easily and they added 13 runs in the 24th over with two fours. The third wicket partnership contributed 47 runs when de Villiers was gone for 28 runs. Dean Elgar became the fifth victim at 141 in 30.5 overs after scoring 42 off 61 deliveries with 2 fours.

Jean-Paul-Duminy was the other major scorer with 33 as the entire South African team was bowled out for 211 runs with 20 balls to spare.

England lost the early wicket of Ian Bell for 12 when Jonathan Trott joined in with the skipper, Alastair Cook. The innings was stabilised by them and the seventh over produced 11 runs with the help of two fours. The first fifty of the innings was scored in the 12th over and 11 runs later, Cook was caught at deep midwicket by Elgar off Robin Petersen for 20 runs. Ravi Bopara could not open his account and went back after the addition of just three runs.

The young gun of England, Eoin Morgan, associated with Trott in the centre and the first sent the ball twice out of the rope in the 24th over. Morgan was the most aggressive of the two and the score board kept moving as the ball visited the boundary line regularly. Jonathan Trot reached his fifty in the 33rd over and Morgan achieved the same milestone in the next over. The hundred runs partnership was registered in the 37th over as Eoin Morgan was caught and bowled on the fifth ball of the next over by Petersen for 73 off 67 balls with 2 sixes and 7 fours.

Jonathan Trott held the innings together with a couple of little partnerships and enhanced the score to 207 when he lost his wicket for 71 off 125 deliveries with just two fours. England achieved the target by scoring 212 runs for the loss of six wickets on the last ball of the 48th over when Samit Patel scored a single.

Robin Petersen was the highest wicket taker with two whereas Dale Steyn, Morne Morkel and Wayne Parnell shared one wicket each.

England came back to the series strongly by winning the third encounter with a good margin of four wickets. The five match series is levelled at 1-1, and the English side has once again clinched the ICC ODI No.1 spot with a rating of 121 and 2779 points.