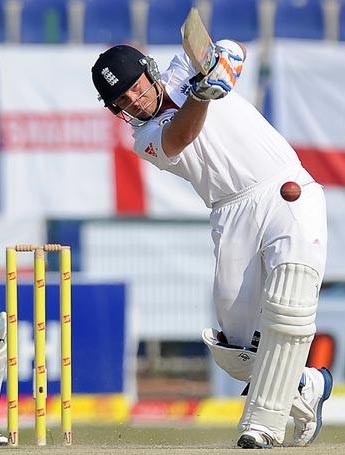 The fascinating top order batsman of England, Ian Bell has ensured that his team will bounce back in the third and final Test against Pakistan in Dubai.

Pakistan has scrambled the world ruling no.1, side in the opening two Tests by Surprise which was not expected by the visitors before the start of the tour. Their batsmen were unable to tackle the dangerous bowling attack of Pakistan and especially the spinners were unplayable.

The first Test was played at Dubai International Cricket Stadium, which Pakistan won on the third day by ten wickets on January 19, 2012. England was bowled out for 192 runs in their first innings and restricted to 160 in their second outing at the crease.

Pakistan smashed 338 runs in their first innings and chased the target of 15 runs without any loss as the match was won by ten wickets. The off spinner Saeed Ajmal broke the back of their batting by grabbing seven wickets in the first Test, followed by three in the second. Leg spinner Abdur Rehman held four as Mohammad Hafeez claimed one wicket in the match.

England folded the first innings of Pakistan for 257 runs in the second Test at Sheikh Zayed Stadium, Abu Dhabi. They thrashed 327 runs in their first innings and the hosts could manage 214 runs in their second innings. The visitors required 145 runs to win the match but they were sent back to the pavilion on mere 72 runs by the magical spinners of Pakistan led by Rehman who clinched six wickets.

England lost the second Test by 72 runs which was discouraging for them. Ian Bell scored 0, 4, 29 and 3 runs in four innings and described the performance of his team including himself as, “It’s been disappointing, but also that comes with cricket, you know you have good times and you have bad times, generally things get a little bit easier the longer you are there, unfortunately I’ve got some balls early that have got me out.”

Pakistani spinners mesmerized the English batsmen and horrified them by securing 34 wickets in two Tests.
Ian Ronald Bell has taken part in 71 Tests, smashed 5063 runs at an excellent average of 47.76, the best of 235 runs with 16 hundreds and 28 fifties. He is one of their top performers with the bat and has played many useful innings for the country.

Rehman was equally excellent by achieving four wickets in the first Test followed by eight in the second while holding the honours of ‘Player of the match’ as well.

Ian Bell acknowledged the class of Pakistani spinners in the previous games but promised his team will fight back in the final encounter. He said, “Credit to the Pakistan spinners, they bowled exceptionally well, we knew they would be big challenge for us, we know that’s gone now, the series has been lost and we got a really important last game.”

The third Test will be played at Dubai from February 3, 2012, England will do their best to win the last match while Pakistan will go for the clean sweep.