An unbroken 172 runs sterling partnership between Hashim Amla and AB de Villiers saw their team through the crises while beating England in the 5th ODI.

Hashim Amla (South Africa) was declared ‘Player of the match’ for his brilliant innings. He also earned the ‘Player of the series’ recognition after hammering 335 runs at an excellent average of 111.66, the best of 150 with one century and one fifty during the five ODIs.

The fifth and final One Day International of the series was played on Wednesday, September 5, 2012, at Trent Bridge, Nottingham.

Earlier, the captain of England, Alastair Cook, won the toss and elected to bat on the anticipation of piling up a mammoth total on board. He opened the innings with the prominent batsman, Ian Bell, and they started off well by scoring 19 runs in the first three overs. They took the score to 23 when Bell was declared leg before wicket off Robin Petersen for just 10 runs.

Ravi Bopara was unable to impress again, he was gone for a duck and the second wicket was lost at 24 in 4.3 overs. Jonny Bairstow joined in next with Cook and they added nine runs in the eighth over with a couple of fours. The first fifty of the innings was scored in the 13th over and the third wicket contributed 55 runs when Bairstow lost his wicket for 29 runs. England faced another blow when Eoin Morgan was caught at mid on by Hashim Amla off Jean-Paul-Duminy without opening his account and the home side was reeling at 4-82 in 19.5 overs.

The wicketkeeper batsman, Craig Kieswetter, came in next as Cook was stranded at the other end. The flow of runs came down due to the regular fall of the wickets and Alastair Cook attained his 13th ODI fifty on the first ball of the 25th over. He was caught and bowled by Faf du Plessis on the second ball of the next over for 51 off 72 balls with 6 fours.

Kieswetter and Chris Woakes provided some resistance against the deadly bowling of the Proteas by scoring 33 runs each as the innings of England was rolled back for 182 with 28 balls to spare.

Robin Petersen was the highest wicket taker with three, Dale Steyn and Morne Morkel held two each whereas Wayne Parnell, Jean-Paul-Duminy and Faf du Plessis shared one wicket each.

South Africa initiated the innings in a dismal way as three of their top order batsmen went back to the pavilion for 14 mere runs. They were unable to tackle with the sheer fast bowling of James Anderson and Jade Dernbach who held two and one wickets respectively. The competent batsman, Graeme Smith was gone for one run, Faf du Plessis scored three whereas Dean Elgar managed one as well.

The Proteas skipper, AB de Villiers, joined in with Hashim Amla and started the repair work. The first dispatched 3 fours in the sixth and seven overs and the latter got two in the 12th over. The duo carried on accumulating the runs while keeping their wickets intact and the first hundred of the innings was scored in the 22nd over. Both batsmen achieved their fifties in the 23rd over and they continued towards the road to prosperity.

Alastair Cook utilised six bowlers to separate the two batsmen but was unable to dislodge the partnership. Hashim Amla punished Dernbach for 12 runs in the 33rd over and hit the winning four on the third ball of the 35th over. He remained unbeaten for 97 off 107 with 1 six and 9 fours, AB de Villiers held his end by scoring 75 from 79 deliveries comprising 10 fours as the visitors smashed 186 runs.

South Africa won the fifth ODI with a massive margin of seven wickets and levelled the series at 1-1. 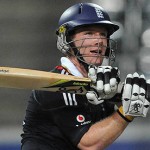