Amit Mishra bowled superbly, he laid the foundation of another win for India and their skipper, Virat Kohli, did the rest with the bat as Zimbabwe lost the game.

The innings of the hosts was rolled back for 183 in 46 overs and the visitors achieved the target by plundering 187 for the loss of just three wickets with 14.3 overs to spare.

Amit Mishra (India) was declared ‘Player of the match’ for his brutal bowling spell of 4-47.

The third One Day International of the five match series was played on Sunday, July 28, 2013, at Harare Sports Club.

Earlier, Virat Kohli won the toss for India, offered the batting to the rival team and removed their openers for just two runs. Hamilton Masakadza and his skipper Brendan Taylor took the challenge by adding few useful runs. The first hit two back to back fours in the fifth over and Taylor got two by the end of the 10th one. Masakadza was dropped at 23 three overs later and the partnership was broken at 67 when Taylor was gone for 23 runs. Sean Williams was the next batsman in whereas Amit Mishra got rid of Hamilton Masakadza and Malcolm Waller in the 20th over for 38 and 0 runs respectively.

The middle order batting of the home side collapsed against the deadly bowling of the Men in Blue and Waller was the only batsman who gave some resistance at his end. Sean Williams became the 8th victim after scoring 45 off 53 balls with 1 six and 2 fours. Tendai Chatara scored 23 while the entire Zimbabwe team was bowled out for 183 with four overs still left in the game.

India lost their first wicket at 27 as Rohit Sharma was caught behind by Taylor off Michael Chinouya for 14. Virat Kohli joined in with Shikhar Dhawan who got 2 fours in the seventh over and the duo added another 3 boundaries in the coming overs. Dhawan was caught by Vusi Sibanda off Tendai Chatara for 35 off 32 with 5 fours. Ambati Rayudu got together with Kohli who kept on consolidating at the other end gradually.

The pair kept on cruising towards the target with occasional boundaries and took the score to 131 in 30.1 overs. Ambati Rayudu was caught and bowled by Brian Vitori for 33. Suresh Raina appeared on the scene next and Virat Kohli smashed his 24th ODI fifty in the 34th over. Kohli remained unbeaten for 68 off 88 deliveries with 1 six and 5 fours, Raina scored 28 while the tourists rushed to 187 in 35.3 overs with seven wickets still intact.

India won the third One Day International with a huge margin of seven wickets and leads the five match series 3-0. The fourth ODI will be played on August 1, 2013, at Queens Sports Club, Bulawayo. 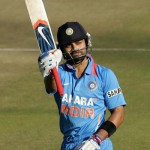 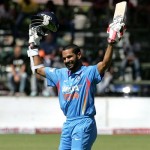