Martin Guptill played a breezy knock against the quality bowling of West Indies as New Zealand reached a respected score at the end of the 1st day’s play.

New Zealand scored 232 runs for the loss of four wickets in 90 overs at stumps on day one.

Earlier, Ross Taylor, the captain of New Zealand, won the toss and opted to bat instantly, on a placid wicket. The innings was opened by Daniel Flynn and Martin Guptill whereas the bowling was initiated by Ravi Rampaul and Kemar Roach. The openers started watchfully and scored just 16 runs in the first nine overs without a single boundary.

Flynn sent the ball twice rolling over the rope in the 10th over and Guptill got the same result in the 13th over. The first fifty of the innings was posted on board in the 18th over as the batsmen survived a few leg before wicket appeals. They found it hard to score the runs freely as Guptill hit the first six of the innings in the 25th over. The Black Caps reached 71 in 29 overs at lunch interval and both batsmen were at the crease with 34 runs each.

The duo continued from where they left before lunch once the play resumed and Guptill sent the ball out of the boundary line twice in the 34th over. The Windies got the first breakthrough when Daniel Flynn was caught by Kieran Powell off Sunil Narine for 45 off 127 balls with 7 fours. The first wicket fell at 97 as Brendon McCullum joined in with the smooth going Guptill who achieved his fifty on the first ball of the 40th over with a four and the first hundred of the innings also appeared on board.

McCullum opened his account on the fifth ball he faced with a four and got few more boundaries in the following overs. He became the second victim for 25 as the score reached 133 and Ross Taylor came in the centre next. Guptill reminded his presence on the wicket with two consecutive fours in the 53rd over and Taylor kept on consolidating from the other end. The batsmen did not take any risk and runs were being added with the odd boundaries. Taylor opened his arms in the 70th over off Narine with 2 fours and the 2nd hundred of the innings was accumulated in the 73rd over.

Sunil Narine struck on the first ball of the 85th over when he uprooted the stumps of Ross Taylor for 45. The third wicket fell at 223 runs and Martin Guptill was unlucky to miss the ton by three runs off 249 deliveries with 1 six and 14 fours as he was caught by Narsingh Deonarine off Sunil Narine.

New Zealand managed 232 runs in 90 overs when the play was called off for the day, Neil Wagner and Kane Williamson were unbeaten with 4 and 2 runs respectively.

Sunil Narine was the most impressive bowler with three wicket and Kemar Roach held one.

The top order batsmen of New Zealand have provided their team  with a solid platform and a determined batting from the rest can put them in a strong position whereas West Indies will anticipate a couple of quick wickets in the first hour of the second day. 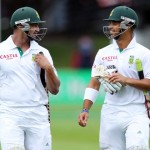