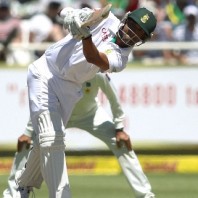 Robin Peterson smashed his maiden Test fifty and spared South Africa a debacle against Pakistan which managed hundred plus lead in their 2nd innings.

Pakistan scored 338 runs in their first innings followed by 100 for the loss of three wickets in the second and South Africa was bowled out for 326 in the first innings.

The third day’s play came to an end on Saturday, February 16, 2013, at Newlands, Cape Town, and the match was witnessed by a capacity crowd.

Earlier, the Proteas started the day at 5-139 after 60 overs whereas AB de Villiers and Dean Elgar were unbeaten for 24 and 11 runs respectively. The batsmen added one run in the first two overs as de Villiers hit the first four of the day in the next over. Elgar hit a couple of fours in the following overs as de Villiers was dropped at 37 by Azhar Ali at gully off Umar Gul on the third ball of the 69th over. Dean Elgar was smartly caught by Younis Khan in the first slip off Saeed Ajmal for 23 in the next over and he was replaced by Robin Peterson.

AB de Villiers got 2 fours in the 71st over and completed his 32nd Test fifty with another four on the first delivery of the 74th over. The second hundred of the innings was achieved with a four from Peterson in the 78th over. Mohammad Irfan clinched his first Test wicket by removing de Villiers for 61 off 113 balls with 7 fours. The seventh wicket went down at 210 as Vernon Philander got together with Peterson who added 10 runs in the 82nd over with 2 fours. The run rate was picked up by the two batsmen and the ball was visiting the fence at regular intervals. 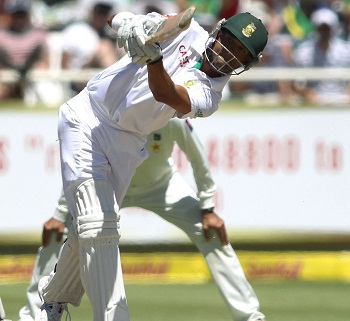 Robin Peterson rushed to his maiden Test fifty with another 2 fours in the 90th over and the pair took the score to 277 when Vernon Philander lost his wicket for 22 runs. Peterson accumulated useful runs along with the tail order batsmen and became the last batsman who was dismissed for 84 off 106 comprising 15 fours as the innings of the home side was folded back for 326 in 102.1 overs.

Saeed Ajmal was the highest wicket taker with six, Mohammad Irfan held three on his debut match and Mohammad Hafeez claimed one wicket.

Pakistan went into their second innings with a nominal lead of 12 runs but lost their openers on just seven runs. Mohammad Hafeez and Nasir Jamshed let their team down once again and were unable to even open their accounts. Younis Khan joined in with Azhar Ali and they crept to 25 in 8 overs at the tea interval. Azhar Ali looked in good nick and got 4 fours until 14th over as the score reached 40 and Younis was at the other end at 11. Azhar survived a confident leg before wicket appeal off Robin Peterson in the next over as the umpire did not give him out and the decision proved right after the review as well. Younis Khan was gone in the following over for 14 when his stumps were dislodged by Dale Steyn.

The visitors were in deep trouble once again in the game by losing three top order batsmen for 45 runs. The skipper, Misbah-ul-Haq walked in the center and associated with Azhar Ali. The duo put their heads down and played off the difficult overs as Misbah-ul-Haq initiated his innings with a four on the 18th ball he faced. Azhar Ali got a life when he was dropped by Peterson off his own bowling at 31 on the fifth ball of the 29th over. Misbah-ul-Haq dispatched the first six of the innings two overs later followed by another in the 37th over as Azhar Ali kept on creeping from the other end. The first hundred of the innings was posted on board in the 44th over which was the last one of the day. Azhar Ali was batting at 45 and Misbah-ul-Haq for 36 as the tourists enhanced the score to 100 with seven wickets in hand.

Dale Steyn was the top wicket taker with two and Vernon Philander got one as the rest three bowlers remained wicketless.

Pakistan has secured an overall lead of 112 runs and another 150-175 runs can put them in a match winning position whereas South Africa will anticipate restricting them within a minimum score. 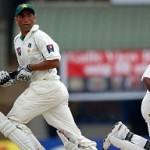 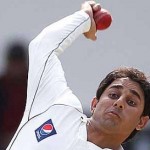