Darren Sammy, the Captain of Visiting West Indies, had a sigh of relief afterIndiarested their regular Captain MS Dhoni in the upcoming five One Day International series. 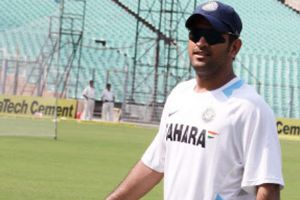 Earlier India crushed the visitors 2-0 in the recently concluded three Test series by winning the first two matches while the third one ended as a tied encounter.

The second Test was won with a bigger margin of an innings and 15 runs at Eden Gardens, Kolkata, on November 17, 2011.

The third Test held at Wankhede Stadium, Mumbai, where India required 243 runs to win the match but could manage to score 242 runs under tense conditions and that was the only second Test which ended as tied.

West Indies anticipates a thrilling ODI series as they have a talented side and Sammy believes the youngsters will fight well and the results will be positive for them.

He was convinced that the players like Kieron Pollard will perform well as they have the wide experience of playing cricket in India as he has been brilliant in the India Premier League.

Sammy narrated that Pollard will be instrumental in bringing them victories and commented,

“Having players like Kieron Pollard, who is an integral member of Mumbai Indians in the IPL T20, in their ranks, Sammy believes his team will return home on a winning note, putting behind the disappointment of the 0-2 thrashing in the three-match Test series.”

Sammy rated MS Dhoni as a great finisher of the limited over game and he has proved that time and again, his absence will be felt badly by the home side.

India  demolished England in the recently concluded ODI series 5-0 under the Captaincy of Dhoni who led them from the front by scoring 212 runs, the highest of unbeaten 87 runs with two fifties. He further complimented Dhoni as,

“There is no doubt (thatIndiawill miss Dhoni)…looking at the one-day series againstEngland(both away and inIndia), Dhoni contributed a lot at his position. Basically, he finishes the game forIndiaall the time.”

The first ODI will be played between the two teams on November 29, 2011, at Cuttackand Sammy is looking forward to win the series with his young guns including Pollard and the absence of Dhoni will be a plus point for them.