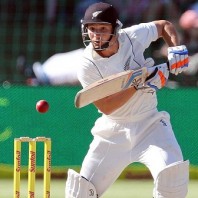 The deadly bowling of South Africa continued on the third day when New Zealand was forced to follow on and the visitors lost four wickets in the second innings.

South Africa thrashed 525 runs after losing eight wickets and declared their first innings. New Zealand was sent back to the pavilion for 121 in the first innings while managing 157 runs in 67 overs with 6 wickets in hand in the second.

Earlier, the Black Caps initiated their first innings in a dismal condition at their overnight score of 6-47 in 24 overs whereas BJ Watling and Doug Bracewell were unbeaten at 15 and 3 runs accordingly. Watling started off well by hitting 2 fours in the 28th over as Bracewell defended well for his seven runs scored off 40 balls he faced. The hosts got the first breakthrough in the next over when Doug Bracewell was caught behind by AB de Villiers off Dale Steyn for seven runs. 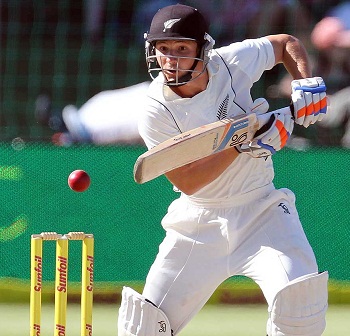 BJ Watling – Sheild against the deadly Proteas bowling in both innings

BJ Watling was the only hope for the visitors as the wickets kept on crumbling from the other end. He added 14 runs in the 38th over with 3 fours as Trent Boult supported him well for the last wicket stand. Watling attained his second Test fifty with a couple of fours in the 41st over. Boult dispatched the first six of the innings in the 42nd over as Watling was finally caught at first slip off Morne Morkel for 63 from 87 balls with 13 well timed fours. New Zealand was bowled out for 121 mere runs after consuming 44.4 overs and conceded a first innings lead of 404 runs.

Dale Steyn was the main destroyer with the ball and grabbed five wickets, Rory Kleinveldt and Robin Peterson shared two each whereas Morne Morkel claimed one wicket.

The Kiwis started off their second innings with caution as their openers, Martin Guptill and their captain Brendon McCullum, were once again slow and timid. The first nine overs produced 21 runs with 2 fours from Guptill and both batsmen hit a four each in the next two overs. The batsmen went back to their shells and were unable to score a single run from 17th to 20th overs. The openers produced 40 runs when Brendon McCullum was declared leg before wicket off Robin Peterson for 11 off 57 balls with just one four.

Kane Williamson joined together with Guptill, they picked up the runs rate and were sending the ball out of the rope continuously. The pair added 24 runs to the total when Williamson was clean bowled by Robin Peterson for 11 runs and was replaced by Dean Brownlie. The pace of scoring was continued by the two batsmen as Guptill hit a four in the 34th over followed by 2 boundaries from Brownlie in the following over. The score was taken to 84 as the stumps of Martin Guptill were dislodged by Rory Kleinveldt for 48 off 122 balls with 10 fours.

The next batsman, Daniel Flynn, was gone at the same score without opening his account as BJ Watling walked in to bat for a second time in the day. Watling dispatched 2 fours in the 42nd over and the first hundred of the innings was displayed on board in the next over. The 50th over produced 13 runs with 2 fours from Brownlie and 1 from Watling. Both of them played brave innings and the ball was travelling out of the fence at regular intervals. Dean Brownlie was at the crease for 44 with 8 fours and BJ Watling secured his end by scoring 41 comprising 7 boundaries. The Black Caps reached 157 for the loss of four wickets in 67 overs.

Rory Kleinveldt and Robin Peterson were the only successful bowlers among seven others with two wickets each.

South Africa is in a commanding position as they still have a first innings lead of 247 runs and require another six wickets to win the match by a lead of more than one innings. New Zealand will rely heavily on the current pair at the crease to play some herculean knocks to take their team out of trouble. 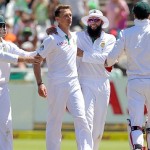 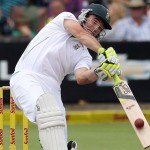