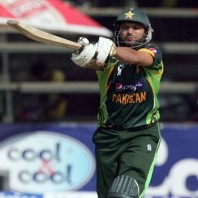 Pakistan beat Zimbabwe with authority as the batting of the visitors was well led by Ahmed Shehzad followed by an all round performance by Shahid Afridi.

Pakistan smashed 161 runs for the loss of five wickets at the end of the stipulated 20 overs and restricted Zimbabwe to 5-136 in the required quota of overs.

Shahid Afridi (Pakistan) was declared ‘Player of the match’ for his outstanding show both with the bat and ball.

The first Twenty20 of the two match series was held at Harare Sports Club on Friday, August 23, 2013.

Earlier, Brendan Taylor, the skipper of Zimbabwe, won the toss and invited the Green Shirts to bat first. The decision paid off instantly when the visitors lost their two top order batsmen at 21 runs. Nasir Jamshed was gone for just two whereas his captain, Mohammad Hafeez, scored three runs. Umar Amin came in next and scored 11 runs in the 6th over along with Ahmed Shehzad and took the score to 51 after 8.2 overs. The first was caught behind by Taylor off Tendai Chatara for 14 and was replaced by the debutant Sohaib Maqsood who hit the first six of the innings in the 12th over. 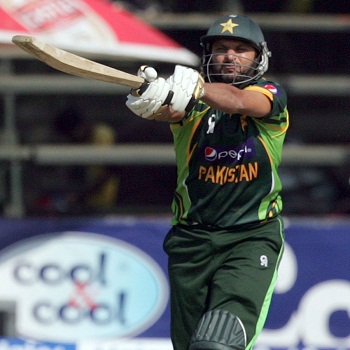 Shahid Afridi – ‘Player of the match’ for his all round performance

Ahmed Shehzad added 3 fours in the coming overs and the partnership was enhanced to 106 in 14.3 overs when Sohaib Maqsood went back to the pavilion for 26 off just 16 balls with 2 high sixes and 1 four. Shahid Afridi appeared in the park next as Ahmed Shehzad plundered his second T20 fifty with a four. The batsmen remained together until 135 runs off 17.2 overs as the latter was caught by Malcolm Waller at the bowling of Shingi Masakadza for 70 from 50 mere deliveries with 1 six and 6 fours. Shahid Afridi and Anwar Ali secured their ends with 23 and 10 as Pakistan thrashed 161 after losing their half side in 20 overs.

Tendai Chatara was the top wicket taker with two whereas Prosper Utseya, Shingi Masakadza and Elton Chigumbura shared one wicket each.

Hamilton Masakdza along with Vusi Sibanda started the chase for the home side and the first hit two back to back fours in the second over. The duo got four more boundaries in the coming overs while Hamilton Masakadza was declared leg before wicket off Anwar Ali for 18 as the score touched 53 in 7.5 overs. Brendan Taylor joined in next with Sibanda and they reached 64 after 10 overs whereas the first hit 2 fours in the following overs. Vusi Sibanda was clean bowled by Shahid Afridi at 80 at his personal feat of 31 off 42 with 3 fours.

Taylor was doing well at his end whereas the middle order batting of the hosts crumbled against the quality spin bowling of the tourists and especially Shahid Afridi was unplayable. Zimbabwe was reeling at 5-117 after 18 overs and required another 45 runs to win the game in 12 balls. They managed 136 runs after the last ball of the 20th over was bowled as Brendan Taylor and Macolm Waller remained unbeaten for 32 and 13 runs respectively.

Shahid Afridi was the star performer with three wickets whereas Anwar and Mohammad Hafeez held one each.

Pakistan clinched the first Twenty 20 with a margin of 25 runs, they lead the two match series 1-0 and the second game will be played at the same venue on August 24, 2013. 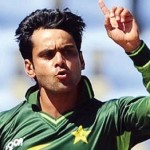 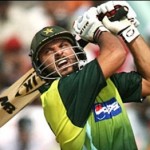