Rangana Herath delivered a lethal bowling spell vs. New Zealand in the opening Test as Sri Lanka took an edge over the visitors on the first day of the match.

New Zealand were bowled out for 221 runs in their first innings and Sri Lanka lost one wicket for just nine runs.

The first Test of the two match series commenced on Saturday, November 17, 2012, at Galle International Stadium.

The Kiwis opened up with Martin Guptill and Brendon McCullum as the first hit two fours in the third over and the latter followed him with the same result in the next over. The first wicket fell at 29 when Guptill was caught in the second slip by Angelo Mathews off Shaminda Eranga for 11 runs. Kane Williamson departed at the same score without opening his account and the skipper Ross Taylor became the next victim at 40 for just nine runs.

Daniel Flynn got together with McCullum and tried to take his team out of trouble while creeping to some respectable score. The Islanders were maintaining their line and length as the batsmen found it difficult to keep the score board moving. The pair preferred to secure their wickets and quite a few maiden overs were bowled by the rival bowlers. Flynn hit two back to back fours in the 29th over as McCullum dispatched the first six of the match in the 31st over.

The first hundred of the innings was posted on board two overs later and things started looking bright for the visitors. Brendon McCullum achieved his 24th Test fifty on the second ball of the 34th over and got his rhythm back by sending the ball out of the fence regularly. The party was over at 130 as Brendon McCullum was clean bowled by Rangana Herath for 68 off 125 balls with 2 sixes and 8 fours. James Franklin was declared leg before wicket for just three runs by Herath again and Daniel Flynn got his fifth half century on the second ball of the 56th over.

The dangerous looking Rangana Herath removed Daniel Flynn for 53 off 152 with 7 fours and the Black Caps were once again in hot waters at 6-155 in 60.3 overs. Kruger van Wyk showed some resistance as the wickets kept on crumbling at regular intervals. He was the eighth batsman who returned to the pavilion for 28 and the entire New Zealand team was bowled out for 221 in 82.5 overs.

Rangana Herath was the most successful bowler with five wickets, Shaminda Eranga held three and Nuwan Kulasekara got two wickets.

Sri Lanka faced an early setback when Dimuth Karunaratne was held lbw for a duck off Tim Southee on his debut Test. Suraj Randiv got together with the other opener Tharanga Paranavitana in the closing stages of the match. The duo survived the last few overs as the home side reached 9 in five overs, Randiv scored three runs off 15 balls whereas Pranavitana has yet to score after facing 12 deliveries.

Sri Lanka has an edge over New Zealand by chasing a nominal score of 221 runs at their home ground with a lot of batting to follow but a couple of quick wickets early on the second day will make the game interesting. 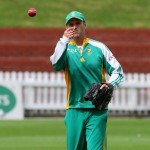