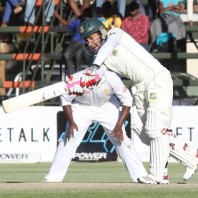 The pace bowler of Bangladesh, Robiul Islam, directed his side with authority assisted by convincing fifties by Shakib Al Hasan and Mushfiqur Rahim vs. Zimbabwe.

The stumps were taken on third day on Saturday, April 27, 2013, at Harare Sports Club.

Earlier, Zimbabwe commenced the day three at 4-158 in 62 overs whereas Elton Chigumbura and Malcom Waller were at the crease with 45 and 30 runs respectively. Waller did not last long and was gone at 163 after scoring 32 runs as Richmond Mutumbami walked in the park. Chigumbura continued scoring runs freely with a few boundaries as Mutumbami hit his first four in the 70th over. The hosts avoided the follow on when Chigumbura hit a six three overs later as his team went past 191 runs and the second hundred of the innings appeared on board in the 75th over.

The sixth wicket partnership flourished to 248 when Richmond Mutumbami was declared leg before wicket off Robiul Islam for 42. Elton Chigumbura departed nine runs later for 86 off 111 balls with 1 six and 8 fours and the entire Zimbabwe team was sent back to the dressing room for 282 in 96 overs.

Robiul Islam was the highest wicket taker with five, Sohag Gazi got four whereas Shakib Al Hasan claimed one wicket. 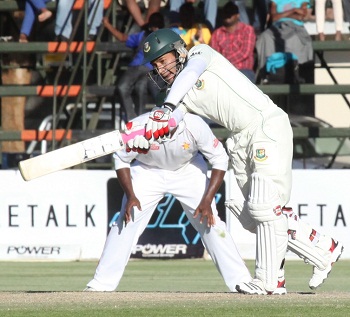 Mushfiqur Rahim – Back to back fifties in the Test

Bangladesh went into their second innings with a big lead of 109 runs but lost their three top order batsmen, Tamim Iqbal, Jahurul Islam and Mohammad Ashraful, for 7, 2 and 4 runs. Mominul Haque and Shakib Al Hasan got together at a difficult situation and tried to mend the early loss. The pair did not panic and kept on creeping as Mominul Haque hit his first four on the 46th ball and became the next victim at 65 once he had scored 29 runs. The captain of the Bengal Tigers, Mushfiqur Rahim, joined in next with Shakib Al Hasan who was securing his end bravely.

The duo found it hard to hit the bowlers at will but got rare boundaries in between their innings. The score crossed the hundred runs mark in the 35th over as Shakib Al Hasan was dropped at 45 by Vusi Sibanda at shortish backward point off Kyle Jarvis. Mushfiqur Rahim added 12 runs in the 38th over with 2 fours and Shakib Al Hasan was again let down in the 42nd over. The latter dispatched his consecutive fifty of the game in the very next over and hit another 2 fours in the 45th over.

Shakib Al Hasan was finally caught behind by Mutumbami off Shingi Masakadza for 59 from 104 balls with 5 fours and was replaced by Nasir Hossain. Mushfiqur Rahim achieved his back to back half century in the match on the last ball of the day with a four. He was unbeaten for 50 off 85 deliveries with 6 fours, Nasir Hossain was at the other end with six as the visitors reached 163 for the loss of five wickets in 49 overs.

Shingi Masakadza was the top wicket taker with three whereas Kyle Jarvis and Hamilton Masakadza shared one wicket each.

Bangladesh has secured an overall lead of 272 runs and will anticipate adding another 80-120 runs with their in form batsmen still at the crease. The hosts Zimbabwe, are in a difficult situation and some miraculous performance from their players can save them the 2nd Test.